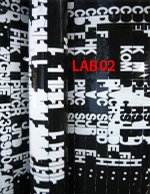 Ketchup on the Carpet; Blue Slushie Tongue; Unicorn Toupé; Candy Necklace Crisis; Mississippi Mud Crunk… all good names for this issue, if it were a mixtape—a nitty-gritty mix of creative culture grilled on a butter-brushed grid. Kicking off side A, we’ve got a brassy track on Indian street graphics by Meena Kadri. Horn please OK! Followed by an avalanche of color in Sudeep’s Army of Gods photo essay. Next, Kicey’s architectural constructs, stitched together with crunchy cliq-hop glitch beats. We get some authentic Memphis grit all up in our grill with Geoffrey Ellis’s photography of deep-fried Americana. Soothing our optic nerves, Joe “Saxy” Sayers lays down a silky smooth jazz groove for chill midnight relaxation. The highlight of the next track is Bingaman-Burt’s implementation of an exotic instrument: a can of compressed air! On side B, a wunderkabinet of visual oddities: pocket protectors, mac & cheese boxes, casino carpet—all make for a lush hypnotic percussion track, followed by a solo fantastico on extant design by Andrew Filer. Finishing the B side, some lovely cuts: a chat with a couch-surfing librarian, a folk artist who performs with a crochet alligator (who is interviewed by a terry-cloth monkey), and a Benedictine monk who builds paper model polyhedrons. So pick a nice summer evening, stick a mixtape in the boombox, grab some cheesecake, sit back on the porch, and let life be good to you.
Joseph Robertson, June 2008

There’s cheezy mixtape metaphors galore in the current issue of LAB (and some fantastically cheezy mac & cheese box covers), which brings potential for a bit of embarrassment at some point in the future, when mixtapes are all played out. Again. Meanwhile, we’re going to revel in the renaissance of mixtape culture and B-side nostalgia.

Cassette from my ex serves up some bitter-sweet mixtape memories. From the site description: They were into you, so they made you a tape. Today you don’t have a cassette player, but you still can’t toss that mix. We share the stories and the soundtrack to your earliest loves.

Here’s a comic about a mixtape gone wrong from Nate Beaty, the bloke responsible for the coding voodoo behind LAB‘s online robot body.

Maybe in the mood for some fresh(er) mixes? Check out muxtape, where you can create & share mp3 mixtapes, the way the kids do. Out with the old, in with the new. Or maybe: in with the old in the form of the new.