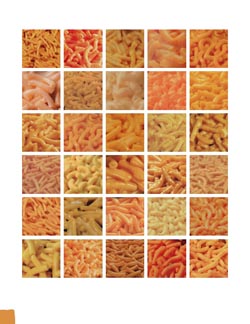 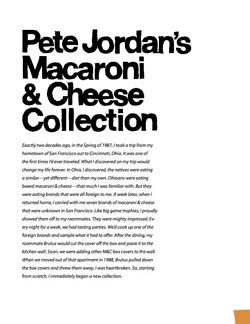 Exactly two decades ago, in the Spring of 1987, I took a trip from my hometown of San Francisco out to Cincinnati, Ohio. It was one of the first times I’d ever traveled. What I discovered on my trip would change my life forever. In Ohio, I discovered, the natives were eating a similar—yet different—diet than my own. Ohioans were eating boxed macaroni & cheese—that much I was familiar with. But they were eating brands that were all foreign to me. A week later, when I returned home, I carried with me seven brands of macaroni & cheese that were unknown in San Francisco. Like big game trophies, I proudly showed them off to my roommates. They were mighty impressed. Every night for a week, we had tasting parties. We’d cook up one of the foreign brands and sample what it had to offer. After the dining, my roommate Brutus would cut the cover off the box and paste it to the kitchen wall. Soon, we were adding other M&C box covers to the wall. When we moved out of that apartment in 1988, Brutus pulled down the box covers and threw them away. I was heartbroken. So, starting from scratch, I immediately began a new collection.

How many box covers are there?

Currently, there are 273 covers representing 185 unique brands (as well as seven generics). In addition to the loss of the original seven box covers, the collection has sustained a few setbacks. For example, several not-yet-laminated covers were stored in a shed in New Orleans and were destroyed by hurricane flooding.

Who purchased all of these?

I purchased about 95% of the box covers in the collection. Others were added by friends (often mailed to me as postcards).

Where were they purchased?

The collection represents boxes purchased in 46 states (all but New Jersey, North Dakota, Montana, and Hawaii) and Canada. I’ve also got some international ones from places like Japan and Scotland (which I sometimes display but I’m far more partial to sticking to the collection’s strong North American base).

Did you eat all of it?

I sure tried to. Once, my van broke down and left me stranded in southern Indiana. I was traveling with a dozen full, new-to-the-collection boxes. I decided to leave the van by the side of the road, grab what I could carry and start hitchhiking. Sadly, that meant emptying the boxes and leaving their contents on the floor of the van—uneaten.

Do you have any favorite brands to eat?

I was always partial to the old Mission brand.

For whatever reason, the content of almost every box in the collection is weighed at 7.25 ounces. Then, parenthetically, some brands convert the metric weight to 205 grams, others insist it’s 206. In fact, 7.25 ounces equals 205.5 grams, so the bickering is over whether to round down or to round up. Though the round-uppers (166) thoroughly outnumber the round-downers (58), it is my wish they could all just hold hands and state (correctly) on their box covers: 205.5 grams. But that’s just the hippie in me, I suppose. ¶ It’s interesting to note Valu Time’s covers. Sometime in 1996, the lone word “Enriched” was added to the cover. The box cover designer took the opportunity to sneak the brand out of the 205 camp and into the 206 camp. Controversial, methinks.

Indeed. Speaking of controversial, it’s rumored that Thomas Jefferson ate sweetened macaroni & cheese in the form of chilled pudding. Are there any variations of M&C you’re fond of?

Well, most boxes suggest the same variation: “Western mac,” which is just added ground beef. Personally, I never add the suggested milk, and only about half the suggested butter. I don’t like my macaroni & cheese soupy. But I will add some salsa or sautéed mushrooms and garlic. And parmesan cheese.

That distinction would have to go to the 1991 edition of Prince. Nice and simple bold lettering. A close-up, cut-out photo. And a solid bright orange background. That background took balls, man. Other—lesser—brands were far too wimpy to place photographed macaroni & cheese against a solid orange background.

If you were given a chance to design a macaroni & cheese box cover, what elements would you include or exclude?

First of all, as with cigarette and liquor advertising, I would exclude any cutesy stuff that markets to children (like an anthropomorphic noodle riding a skateboard and wearing a helmet). Kids may eat this junk, but it’s us adults who have to buy it. So being spared humiliation in the check out line while paying for one’s dinner (that looks like it may contain a box of crayons inside) would be nice. ¶ An awesome close-up photo of a serving of M&C would be necessary for any box cover that I designed. I used to dream of becoming the preeminent macaroni & cheese photographer. Whenever a new box cover was being created, I’d be the go-to guy, the one everyone in the field acknowledged was tops when it came to photos of mac & cheese. That hasn’t happened yet. ¶ The generic boxes have a strong appeal for me, especially when seen in contrast with all the craptacular design. It seems generic brands have all evolved into special upscale “private label” brands… basically, the same ingredients, made by the same factory, but all dolled up with a fancy new label.

Do you think the old-skool generic will ever make a comeback?

A lot of brands, including the generic ones, all contained the exact same product inside. They came from the same factories, with simply a different print job (and price tag) on the box. But yeah, I’ve always had a soft spot for generics. I liked the idea that they didn’t give a shit what they looked like. It was simply a product without any hard sell.

What kind of changes have you noticed over the years?

Both Creamettes and Prince replaced awesome designs with ones that employed the word “Yummy.” Ugh.

What are your favorite brand names?

You live in Amsterdam now. Is macaroni & cheese available, or is there a Dutch equivalent?

Yesterday, I walked into a British expat store around the corner from the attic where I write. I suppose people who just can’t do without Betty Crocker or whatever spend a fortune to shop at these places. Anyway, I happened to notice a box of Tesi Bon brand macaroni & cheese. Tesi Bon? I’d never heard of it before. What was it doing here in Holland? In an expat shop? That made no sense. So I paid 2.25 euros for it (over $3.00!). Indeed, the address listed is Dutch. Some online research reveals that Tesi Bon is a product of American Food Service. This company caters to Americans living in Europe by importing Pop Tarts, Marshmallow Fluff, and other staples of the American diet that aren’t readily available in Europe. It’s bizarre to think that someone is trying to make money importing macaroni & cheese. But then I just paid €2.25 for it, so who knows…

Have you started up any other collections?

I’m not much of a collector of physical objects. I spent most of my adult life traveling and living out of a duffel bag. I owned as few possessions as possible. Any type of collecting I do is in nonphysical realm, like collecting states that I’ve washed dishes in (46). ¤