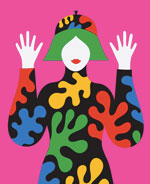 “Olimpia is a creative female-type person born into an artistic family in Milano. She drives a Vespa and has large round glasses, but the main thing is that she can, and does, draw like an ambidextrous octopus. One with with prodigious skills, and a doppio espresso.”

“Although she will admit to being influenced by Bruno Munari, Paul Rand and the other usual suspects, she creates super fresh shapely shapes, completely new voluptuous forms, in her own clean palette of brights and darks, flat as a pancake, baby.”