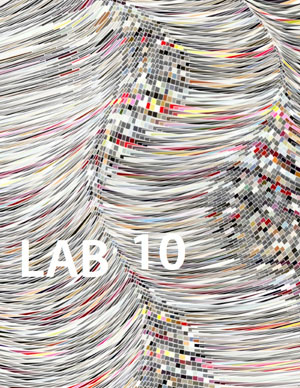 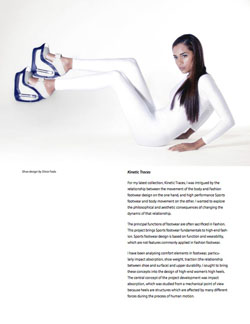 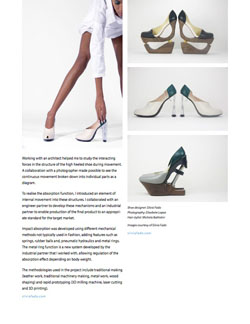 For my latest collection, Kinetic Traces, I was intrigued by the relationship between the movement of the body and Fashion footwear design on the one hand, and high performance Sports footwear and body movement on the other. I wanted to explore the philosophical and aesthetic consequences of changing the dynamic of that relationship.

The principal functions of footwear are often sacrificed in Fashion. This project brings Sports footwear fundamentals to high-end fashion. Sports footwear design is based on function and wearability, which are not features commonly applied in Fashion footwear.

I have been analyzing comfort elements in footwear, particularly impact absorption, shoe weight, traction (the relationship between shoe and surface) and upper durability. I sought to bring these concepts into the design of high-end women’s high heels. The central concept of the project development was impact absorption, which was studied from a mechanical point of view because heels are structures which are affected by many different forces during the process of human motion.

Working with an architect helped me to study the interacting forces in the structure of the high heeled shoe during movement. A collaboration with a photographer made possible to see the continuous movement broken down into individual parts as a diagram.

To realize the absorption function, I introduced an element of internal movement into these structures. I collaborated with an engineer partner to develop these mechanisms and an industrial partner to enable production of the final product to an appropriate standard for the target market.
Impact absorption was developed using different mechanical methods not typically used in Fashion, adding features such as springs, rubber balls and, pneumatic hydraulics and metal rings.
The metal ring function is a new system developed by the industrial partner that I worked with, allowing regulation of the absorption effect depending on body weight.