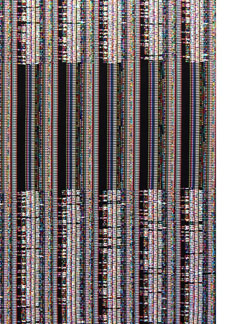 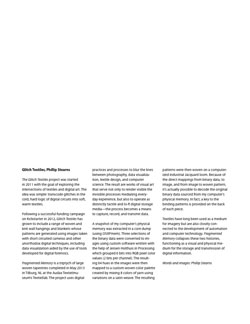 The Glitch Textiles project was started in 2011 with the goal of exploring the intersections of textiles and digital art. The idea was simple: transcode glitches in the cold, hard logic of digital circuits into soft, warm textiles.

Following a successful funding campaign on Kickstarter in 2012, Glitch Textiles has grown to include a range of woven and knit wall hangings and blankets whose patterns are generated using images taken with short circuited cameras and other unorthodox digital techniques, including data visualization aided by the use of tools developed for digital forensics.

Fragmented Memory is a triptych of large woven tapestries completed in May 2013 in Tilburg, NL at the Audax Textielmuseum’s Textiellab. The project uses digital practices and processes to blur the lines between photography, data visualization, textile design, and computer science. The result are works of visual art that serve not only to render visible the invisible processes mediating everyday experience, but also to operate as distinctly tactile and lo-fi digital storage media—the process becomes a means to capture, record, and transmit data.

A snapshot of my computer’s physical memory was extracted in a core dump (using OSXPmem). Three selections of the binary data were converted to images using custom software written with the help of Jeroen Holthuis in Processing which grouped 6 bits into RGB pixel color values (2 bits per channel). The resulting 64 hues in the images were then mapped to a custom woven color palette created by mixing 8 colors of yarn using variations on a satin weave. The resulting patterns were then woven on a computerized industrial Jacquard loom. Because of the direct mappings from binary data, to image, and from image to woven pattern, it’s actually possible to decode the original binary data sourced from my computer’s physical memory. In fact, a key to the binding patterns is provided on the back of each piece.

Textiles have long been used as a medium for imagery but are also closely connected to the development of automation and computer technology. Fragmented Memory collapses these two histories, functioning as a visual and physical medium for the storage and transmission of digital information.