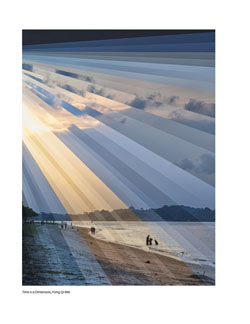 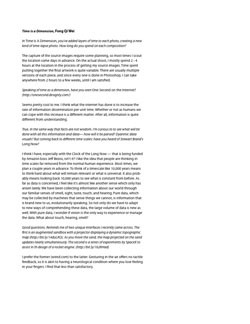 In Time Is A Dimension, you’ve added layers of time to each photo, creating a new kind of time-lapse photo. How long do you spend on each composition?

The capture of the source images require some planning, so most times I scout the location some days in advance. On the actual shoot, I mostly spend 2 – 4 hours at the location in the process of getting my source images. Time spent putting together the final artwork is quite variable. There are usually multiple versions of each piece, and since every one is done in Photoshop, I can take anywhere from 2 hours to a few weeks, until I am satisfied.

Speaking of time as a dimension, have you seen One Second on the Internet?

Seems pretty cool to me. I think what the internet has done is to increase the rate of information dissemination per unit time. Whether or not as humans we can cope with this increase is a different matter. After all, information is quite different from understanding.

True. In the same way that facts are not wisdom. I’m curious to to see what will be done with all this information and data— how will it be parsed? Dyanmic data visuals? But coming back to different time scales: have you heard of Stewart Brand’s Long Now?

I think I have, especially with the Clock of the Long Now — that is being funded by Amazon boss Jeff Bezos, isn’t it? I like the idea that people are thinking in time scales far removed from the normal human experience. Most times, we plan a couple years in advance. To think of a timescale like 10,000 years means to think hard about what will remain relevant or what is universal. It also probably means looking back 10,000 years to see what is constant from before. As far as data is concerned, I feel like it’s almost like another sense which only has arisen lately. We have been collecting information about our world through our familiar senses of smell, sight, taste, touch, and hearing. Pure data, which may be collected by machines that sense things we cannot, is information that is brand new to us, evolutionarily speaking. So not only do we have to adapt to new ways of comprehending these data, the large volume of data is new as well. With pure data, I wonder if vision is the only way to experience or manage the data. What about touch, hearing, smell?

Good questions. Reminds me of two unique interfaces I recently came across. The first is an augmented sandbox with a projector displaying a dynamic topographic map. As you move the sand, the map projected on the sand updates nearly simultaneously. The second is a series of experiments by SpaceX to assist in th design of a rocket engine.

I prefer the former (wired.com) to the latter. Gesturing in the air offers no tactile feedback, so it is akin to having a neurological condition where you lose feeling in your fingers. I find that less than satisfactory.

Perhaps we’ll reach a point where we will be able to choose between a variety of user interfaces for various sensory channels (with different feedback mechanisms), with hybrids evolving to suit the needs of people with different learning styles or cognitive styles? In _Time is a Dimension, the photos are physical prints, but the assembly into collage is digital, a process that essentially spans print and digital, physical film and digital bits. _

Sure. I’m no Luddite. First, I embrace technology to produce my art. But the technology must be mature or produce sufficiently good results for me to use. Digital post processing allows me freedom to experiment in ways that may be too time consuming as compared to film. Even though some people think of printing as archaic, printing is a tool which only became affordable in sufficiently good quality in recent years. Large format printing has become more accessible than before. But in the end I look for quality. For now, a print has qualities that a monitor cannot overcome, which are: consistent color (not dependable on a constant power source like monitors) and scale (I can make a print 1 metre wide, but to get a 1-metre-wide-screen will be exorbitant). So, these two: digital capture/processing and output into a physical print— they are complementary.

In a previous interview, you’ve said: “I don’t see the point (at the moment) in doing art for a tiny niche of insiders but [alienating] everyone else. If I want to send a secret message, I’ll just head straight for cryptography.” It sounds like you’re for creating work that is accessible to a wide audience?

My personal opinion is that the value of art can be assessed two ways: if it is relevant many years from the day it was produced, and if it changes the perception of the person who experienced the art. If something is very niche, then once the target audience or demographic has passed on, it will have lost relevance. Also, if something is too over-complicated, then people may never hope to understand the message. Good art should have both breadth and depth, to give a wide demographic something substantial to think about. I don’t pretend I can make good art, but creating breadth in art is surprisingly difficult. In the end, I just want to make stuff that changes people’s perception. If it can happen, that’ll be pretty awesome.

Creating a shift in perception in a wide audience is an awesome thing.

Yes. Today, science does a lot of that! The curious thing about TIAD is that the camera records an objective information of color that is in the scene at different times. This is quite different from our interpretation of the scene— for example,we will consistently interpret a white building as white no matter what color the skies are. In a sense, TIAD brings to attention this contrast in objective recording and our relative perception of color casts in our environment.

A bit like how the appearances of clothes will change with different dressing room lighting, say, a dark blue or black sweater’s appearance varying in the color temperature differences between incandescent, fluorescent, halogen, or LED lighting. Speaking of exploring differences in perceptions, your _Exploded Flowers series approaches a common subject in a unique way._

Yes. Our brains are able to maintain the illusion of color stability, but only up till a certain point. Some science centres have displays where reds look like black under different lighting. The Exploded Flowers was a product of play, just like TIAD. I wondered what the result would be if I laid out the components of a flower while keeping the relative positions of the components intact. And since photography can “freeze time”, it was the ideal way to present the result because flowers/petals/leaves are very perishable. What is interesting about Exploded Flowers are the answers I get when I ask people where they thought the art lies— is it in the arrangement of the flowers? or the digital photography file? or the print? or neither? The answers can be revealing in themselves.

Philosophical questions which remind me of Robert Pirsig’s Zen and Art of Motorcycle Maintenance. The artwork becomes a litmus test of sorts.

Not so much like litmus (which gives Yes / No answers), but maybe a better metaphor would be… Rorschach?

Rorschach. Exactly. In your Floral Color Space series, you constructed a color grid of floral colors.

That’s just another take on flowers and colours. Both are pretty common themes. If I remember correctly, the floral swirls came after my Color Deconstructions, where I explore how I keep the structure in photography to a minimum, while leaving behind colours and some textures. I applied the same idea to both actually. The idea was that realism is different from being literal. Photography is a literal recording of a scene, which may not have an emotional connection with the viewer. Realism is a hook which draws a viewer in, in the way that paintings which are not literal can feel more “real” (you can feel the fire in Joseph Turner’s Burning of the Houses of Parliament). So I thought: why not attempt something similar with photography?

Now I read on the kindle app. Currently reading Plastic by Christopher Fowler. Other recent fiction favourites will be Sandman Slim series by Richard Kadrey, Neptune’s Brood by Charles Stross, and most books by Alastair Reynolds. Current non-fiction I’m starting to read is The Signal and the Noise by Nate Silver, the guy who makes predictions based on stats. I like science and science fiction. Art books— I remember What is Art for? by Ellen Dissanayake as being insightful. I also like Living with Art by Mark Getlein. There’s an app on Josef Albers color studies which is similar to a book— that’s quite fun.

Yep. Yale University Press did some nice work converting The Interaction of Color into an interactive app. Any new projects on the horizon?

I usually have a couple ongoing at any one time, and sometimes I revisit the same projects. Occasionally, projects cross-pollinate as well. Follow me on tumblr to get updated.

Knowing what you know now, what advice would your Future Self give your Past Self?

I’ll ask my past self: What’s the message you want to send in your photography? Find the message, then make your art the messenger.