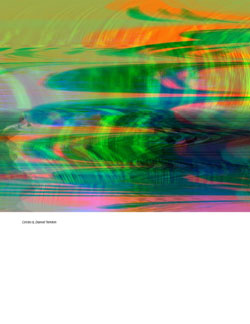 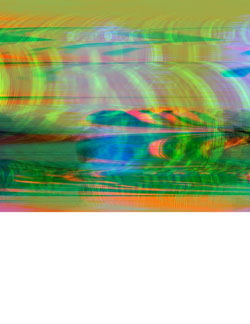 Each image begins as one or a few black squares or circles. They are sonified— imported into an audio editor. Sound effects are added to individual color channels, as if they were sound, transforming the image. Because the tool is used in an unconventional way, there is no immediate way to monitor the effect. The image manipulator has a sense of what each effect does, but no precise control over the result. It is a wrestling with the computer, the results of which are these images. As Curt Cloninger describes databending: “like painting with a very blunt brush that has a mind of its own.”

The look of Glitchometry Stripes (back cover) is more heavily influenced by Op Art works, such as those of Bridget Riley and Victor Vasarely. By using simpler sound effects more sparingly (delay and flanger) on vertical lines, the output is less noisy, and more crisply graphic. The Glitchometry project belongs to Rhizome-at-the-New-Museum’s ArtBase collection and will be featured in a solo show at Transfer Gallery in Brooklyn this November.