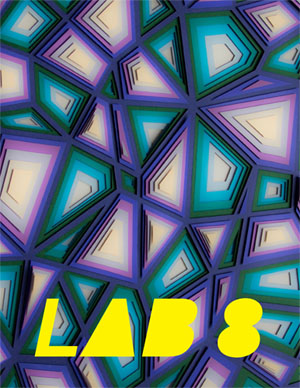 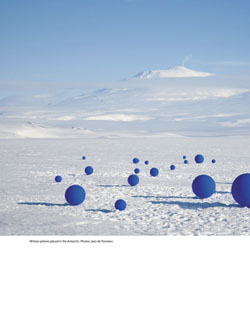 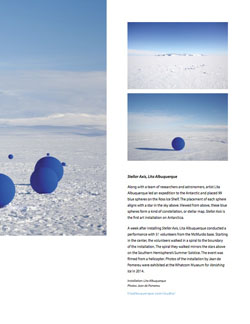 Along with a team of researchers and astronomers, artist Lita Albuquerque led an expedition to the Antarctic and placed 99 blue spheres on the Ross Ice Shelf. The placement of each sphere aligns with a star in the sky above. Viewed from above, these blue spheres form a kind of constellation, or stellar map. Stellar Axis is the first art installation on Antarctica.

A week after installing Stellar Axis, Lita Albuquerque conducted a performance with 51 volunteers from the McMurdo base. Starting in the center, the volunteers walked in a spiral to the boundary of the installation. The spiral they walked mirrors the stars above on the Southern Hemisphere’s Summer Solstice. The event was filmed from a helicopter. Photos of the installation by Jean de Pomereu were exhibited at the Whatcom Museum for Vanishing Ice in 2014.