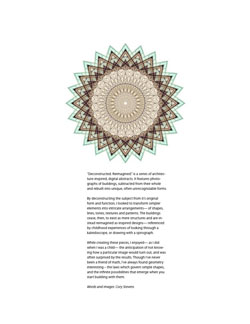 Deconstructed. Reimagined is a series of architecture-inspired, digital abstracts. It features photographs of buildings, subtracted from their whole and rebuilt into unique, often unrecognizable forms. By deconstructing the subject from it’s original form and function, I looked to transform simpler elements into intricate arrangements— of shapes, lines, tones, textures and patterns. The buildings cease, then, to exist as mere structures and are in- stead reimagined as inspired designs— referenced by childhood experiences of looking through a kaleidoscope, or drawing with a spirograph.

While creating these pieces, I enjoyed— as I did when I was a child— the anticipation of not knowing how a particular image would turn out, and was often surprised by the results. Though I’ve never been a friend of math, I’ve always found geometry interesting— the laws which govern simple shapes, and the infinite possibilities that emerge when you start building with them.