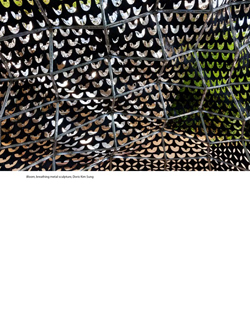 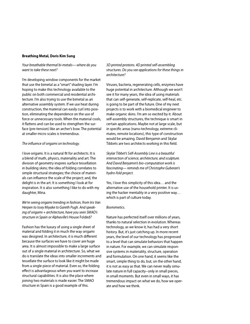 Your breathable thermal bi-metals— where do you want to take these next?

I’m developing window components for the market that use the bimetal as a “smart” shading layer. I’m hoping to make this technology available to the public on both commercial and residential architecture. I’m also trying to use the bimetal as an alternative assembly system. If we use heat during construction, the material can easily curl into position, eliminating the dependence on the use of force or unnecessary tools. When the material cools, it flattens and can be used to strengthen the surface (pre-tension) like an archer’s bow. The potential at smaller micro scales is tremendous.

The influence of origami on technology.

I love origami. It is a natural fit for architects. It is a blend of math, physics, materiality and art. The division of geometry inspires surface tessellation in building skins; the idea of folding correlates to simple structural strategies; the choice of materials can influence the scale of the project; and, the delight is in the art. It is something I look at for inspiration. It is also something I like to do with my daughter, Mina.

We’re seeing origami trending in fashion, from Iris Van Herpen to Issey Miyake to Gareth Pugh. And speaking of origami + architecture, have you seen SMAO’s structure in Spain or Alphaville’s House Folded?

Fashion has the luxury of using a single sheet of material and folding it in much the way origami was designed. In architecture, it is much different because the surfaces we have to cover are huge area. It is almost impossible to make a large surface out of a single material in architecture. So, what we do is translate the ideas into smaller increments and tessellate the surface to look like it might be made from a single piece of material. Even so, the folding effect is advantageous when you want to increase structural capabilities. It is also the place where joining two materials is made easier. The SMAO structure in Spain is a good example of this.

3D printed proteins. 4D printed self-assembling structures. Do you see applications for these things in architecture?

Viruses, bacteria, regenerating cells, enzymes have huge potential in architecture. Although we won’t see it for many years, the idea of using materials that can self-generate, self-replicate, self-heal, etc. is going to be part of the future. One of my next projects is to work with a biomedical engineer to make organic skins. I’m am so excited by it. About self-assembly structures, the technique is smart in certain applications. Maybe not at large scale, but in specific areas (nano-technology, extreme climates, remote locations), this type of construction would be amazing. David Benjamin and Skylar Tibbets are two architects working in this field.

Yes, I love this simplicity of this idea…and the alternative use of the household printer. It is using the hacker mentality in a very positive way…which is part of culture today.

Nature has perfected itself over millions of years, thanks to natural selection in evolution. Whereas technology, as we know it, has had a very short history. But, it’s just catching up. In more recent years, the level of our technology has progressed to a level that can simulate behaviors that happen in nature. For example, we can simulate responsive systems in materiality, structure, operation and formulation. On one hand, it seems like the smart, simple thing to do, but, on the other hand, it is not as easy as that. We can never really simulate nature in full capacity—only in small pieces, in small moments. But even in small ways, it has tremendous impact on what we do, how we operate and how we think.

With 3D printing and laser-cutting, we’re starting to see some interesting applications, like biomimetic jewelry from Nervous System.

It is very cool. I need to get me some!

You did an installation for MOCA. What was your experience?

My pavilion never got built due to a huge amount of politics and budget problems. It did get published in the catalogue. Instead, I have resurrected the project and am doing a new rendition of it (even cooler!) at the Santa Barbara MCA in January.

Can you tell us a bit about the new rendition?

Yes, it is a proposal for using the bending of the bimetal during the assembly process only. By heating the material, it can curve into position. When it cools, it pretensions the surface like an archer’s bow. We are compiling this idea into a design for a tower. It’s gonna be pretty wild.

If you could have any superpower.

I have always wanted to fly, not like Superman and not on a flying carpet, but like a bird. Would I be able to use it to be a hero? I’m not sure. I haven’t thought it through that far.

You could certainly do some amazing architectural fly-throughs with a superpower like that.

Gravity is a limitation for design in architecture (in both good and bad ways). In some instances, we try so hard to defy gravity. Maybe that is why I am interested in flying. The idea of “load-bearing” would be completely different without gravity.

I’m reading A Tale for the Time Being right now. Even though I haven’t finished it yet, I can easily say that it is an amazing book. The writing is exquisite, the structure clever, the storyline seamless. It connects a story about a girl in Japan with a writer in Vancouver with the Japanese Tsunami disaster with the passage of time—both real and theoretical. I highly recommend it.