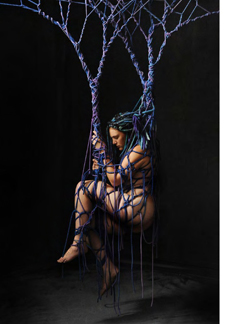 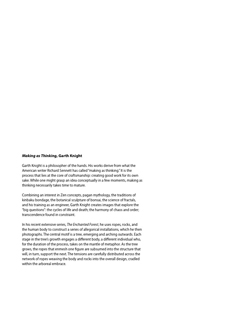 Garth Knight is a philosopher of the hands. His works derive from what the American writer Richard Sennett has called “making as thinking.” It is the process that lies at the core of craftsmanship: creating good work for its own sake. While one might grasp an idea conceptually in a few moments, making as thinking necessarily takes time to mature.

Combining an interest in Zen concepts, pagan mythology, the traditions of kinbaku bondage, the botanical sculpture of bonsai, the science of fractals, and his training as an engineer, Garth Knight creates images that explore the “big questions”: the cycles of life and death; the harmony of chaos and order; transcendence found in constraint.

In his recent extensive series, The Enchanted Forest, he uses ropes, rocks, and the human body to construct a series of allegorical installations, which he then photographs. The central motif is a tree, emerging and arching outwards. Each stage in the tree’s growth engages a different body, a different individual who, for the duration of the process, takes on the mantle of metaphor. As the tree grows, the ropes that enmesh one figure are subsumed into the structure that will, in turn, support the next. The tensions are carefully distributed across the network of ropes weaving the body and rocks into the overall design, cradled within the arboreal embrace.

Philosophy and bondage may seem an unlikely combination, but folktales have always been a heady mix of homily and earthiness. This is an enchanted forest and the romance of enchantment is always underpinned by a dominating agent. The individual inhabiting, imprisoned in, or born of, a tree is a trope found in many cultures and eras. Today, while we may not anthropomorphise trees in quite the same way, we have come to understand our ecological interconnectedness through the mutual exchange of gases in the air we breathe.

For Garth Knight, the images draw on the tree as a metaphor for consciousness. Sensations and feelings gather in the benighted soil of the subconscious to rise into awareness through the unified sense of self, represented by the trunk. Upward they urge, only to branch out into myriad ideas and actions in their quest for the heavens. The leaves that spring from the tips of this aspirant filigree bring life to the atmosphere before falling earthward to be drawn down into the subterranean decay from whence the cycle begins anew.

The cycle of life and the mystery of consciousness reverberate through these images like wind in woodland, as the ritual of making becomes a focus of meditation in the philosophy of the hands.