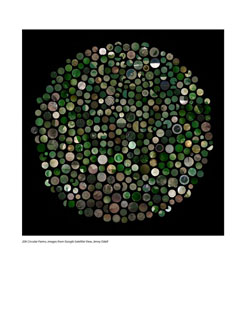 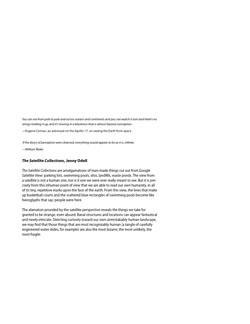 You can see from pole to pole and across oceans and continents and you can watch it turn and there’s no strings holding it up, and it’s moving in a blackness that is almost beyond conception.
—Eugene Cernan, an astronaut on the Apollo 17, on seeing the Earth from space

If the doors of perception were cleansed, everything would appear to be as it is, infinite.
—William Blake

The Satellite Collections are amalgamations of man-made things cut out from Google Satellite View: parking lots, swimming pools, silos, landfills, waste ponds. The view from a satellite is not a human one, nor is it one we were ever really meant to see. But it is precisely from this inhuman point of view that we are able to read our own humanity, in all of its tiny, repetitive marks upon the face of the earth. From this view, the lines that make up basketball courts and the scattered blue rectangles of swimming pools become like hieroglyphs that say: people were here.

The alienation provided by the satellite perspective reveals the things we take for granted to be strange, even absurd. Banal structures and locations can appear fantastical and newly intricate. Directing curiosity toward our own unmistakably human landscape, we may find that those things that are most recognizably human (a tangle of carefully engineered water slides, for example) are also the most bizarre, the most unlikely, the most fragile.

This shift in perspective can make visible to us the utter strangeness of everything, including ourselves. It creates a moment of openness, a temporary removal that allows us to see our world as the strange and specific place it has become, before the old familiarity settles back in. At best, this removal can effect what writer Walter Benjamin once described as “blasting” an image from the historical continuum, in some cases allowing us to really see it for the first time.

To be able to see this way has broad implications. Speaking about dialectical images, Benjamin gave the example of seeing an image of a bomber plane superimposed on DaVinci’s original drawing of a flying machine— which DaVinci, heartbreakingly, envisioned using “in order to look for snow on the mountain summits, and then return to scatter it over city streets shimmering with the heat of summer.”

Such a superimposition enables the realization that history is not linear, and each moment of the past existed in a field of possibilities (as in the early stages of any technology). This kind of stereoscopic vision allows us to see through the idea that things turned out the way they did because they were destined to be this way. In other words, to re-open the field of possibility in the past is to re-open that same field in the future. At a remove from things so familiar we have forgotten to look at them, we can just begin to see it: all of the things the world has not become and, most importantly, all of the things it could become.