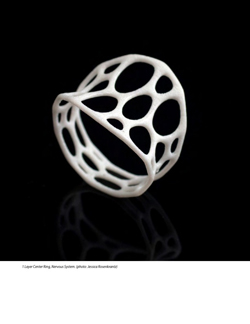 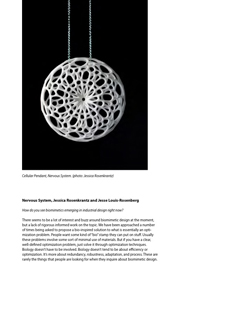 How do you see biomimetics emerging in industrial design right now?

There seems to be a lot of interest and buzz around biomimetic design at the moment, but a lack of rigorous informed work on the topic. We have been approached a number of times, being asked to propose a bio-inspired solution to what is essentially an optimization problem. People want some kind of “bio” stamp they can put on stuff. Usually these problems involve some sort of minimal use of materials. But if you have a clear, well-defined optimization problem, just solve it through optimization techniques. Biology doesn’t have to be involved. Biology doesn’t tend to be about efficiency or optimization. It’s more about redundancy, robustness, adaptation, and process. These are rarely the things that people are looking for when they inquire about biomimetic design.

Can you tell us a story behind one of your favorite designs?

One of our favorite pieces (which is actually an infinite series of designs) is the Hyphae Lamp. It is a 3D-printed LED light based on leaf venation. We had always been interested in leaf veins, since they are beautiful and fascinating structures, but we had not considered making work based on them. That changed when I came across an interesting paper on PLoS Computational Biology (a great, open-access journal). That paper proposed that leaf veins patterns could be caused, in part, by elastic stress in a growing leaf. The explanation was that the interior layer (mesophyll) grows slightly faster than the stiff, exterior epidermal layers. This causes stress, kind of like the inverse of cracks forming in drying mud. Stiff veins then differentiate as a reaction to the stress, relieving it. This explanation was exciting, because rather than some kind of complex biological pathway genetically defining a pattern generating system, there could be a physically-based description of vein formation. A simple statement like “one area grows faster than another” could explain complex biological form. This has absolutely nothing to do with the design system we ultimately created to make Hyphae. But this got us interested, and we started researching other theories of leaf venation. It wasn’t until a year later that we developed a 2D system based on leaf venation for a new collection. Another year after that and through some exciting technical breakthroughs, we extended the system to 3D and produced the system that generates the Hyphae Lamps.

Reminds me of reading about kale ruffles (outside edge of leaf grows exponentially faster than inside) and feeling my brainbox light up. With the Hyphae Lamps, each lamp is “grown” individually, so no two are alike?

Yes, no two are the same. We are also working on a project based on that kale-like differential growth.

Fascinating. Could you tell us about the Full Moon Series?

The Full Moon series is our first series of one-of-a-kind objects. It is part of our Dendrite line, which is based on a growth process called Diffusion Limited Aggregation. This process develops fractal branching structures by building up randomly moving (aka diffusing) particles. However, rather than let these branches form, the growth is constrained to a circular volume that gradually fills up.

The puzzles are my favorite project. Perhaps that is simply because I really like traditional jigsaw puzzles, but I also enjoyed developing the cut generation system. Each puzzle has a one-of-a-kind cut pattern combining different cut styles or modes of growth. The pieces are grown through a simulation of dendritic solidification, another type of diffusion-based branching growth. The system models a crystal growing in a super-cooled environment. A bit like frost, but that is actually different and involves condensation. The interplay between freezing, which causes growth that gives off heat, and the natural spread of heat, which limits growth, leads to branching forms. The interesting aspect of our puzzle generation is that we don’t have a single solid crystal growing in a uniform fluid environment. Instead, each “crystal” (representing a puzzle piece) is surrounded by other “crystals,” and each of these acts like its own phase of matter, all of which are super-cooled relative to one another. So you have to discard this notion that one is solid and one is liquid. There is a physically impossible situation where there are infinite phases of matter that are all growing into each other. This would be a multi-phase model of dendritic solidification, and it allows us to grow each puzzle piece symmetrically interlocking with its neighbors.

Since we are always using computer-controlled techniques and often with a 3rd-party partner, the most difficult part of working with any material is finishing. How can you get laser-cut wool not to smell like burnt hair? How can you make porous 3D prints not pick up dirt so easily? I think my favorite material is wood, though of all the materials we use, it usually takes the most finishing.

Yum. Such a wonderful smell. Thank you.