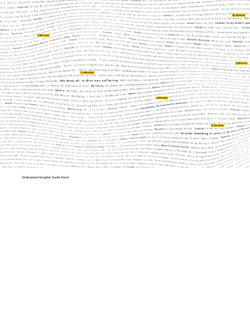 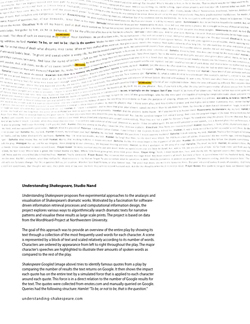 Understanding Shakespeare proposes five exper­i­mental approaches to the analasyis and visu­al­isa­tion of Shakespeare’s dramatic works. Motivated by a fascin­a­tion for software-driven inform­a­tion retrieval processes and compu­ta­tional inform­a­tion design, the project explores various ways to algorith­mic­ally search dramatic texts for narrative patterns and visu­alise these results as large scale prints. The project is based on data from the WordHoard-Project at Northwestern University.

The goal of this approach was to provide an overview of the entire play by showing its text through a collection of the most frequently used words for each character. A scene is represented by a block of text and scaled relatively according to its number of words. Characters are ordered by appearance from left to right throughout the play. The major character’s speeches are highlighted to illustrate their amounts of spoken words as compared to the rest of the play.

Shakespeare Googled (image above) tries to identify famous quotes from a play by comparing the number of results the text returns on Google. It then shows the impact each quote has on the entire text by a simulated force that is applied to each character around each quote. This force is in a direct relation to the number of Google results for the text. The quotes were collected from enotes.com and manually queried on Google. Queries had the following structure: Hamlet “To be, or not to be, that is the question.”