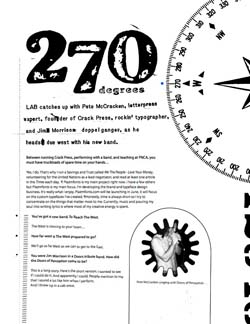 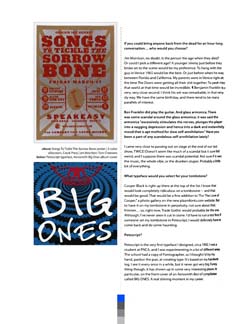 Between running Crack Press, performing with a band, and teaching at PNCA, you must have truckloads of spare time on your hands…

Yes, I do. That’s why I run a Savings and Trust called We The People – Love Your Money, volunteering for the United Nations as a lead negotiator, and read at least one article in the Times each day. Plazmfonts is my main project right now. I have a few others but plazmfonts is my main focus. I’m developing the brand and typeface design business. It’s really what I enjoy. Plazmfonts.com will be launching in June, it will focus on the custom typefaces I’ve created. ¶Honestly, time is always short so I try to concentrate on the things that matter most to me. Currently, music and pouring my soul into writing lyrics is where most of my creative energy is spent.

You’ve got a new band, To Reach The West.

The West is coming to your town…

How far west is The West prepared to go?

We’ll go as far West as we can to get to the East.

You were Jim Morrison in a Doors tribute band. How did the Doors of Perception come to be?

This is a long story. Here’s the short version. I wanted to see if I could do it. And apparently I could. People mention to me that I sound a lot like him when I perform. And I threw up in a cab once.

If you could bring anyone back from the dead for an hour-long conversation… who would you choose?

Jim Morrison, no doubt. Is the person the age when they died? Or could I pick a different age? A younger Jimmy just before they broke on to the scene would be my preference. To hang with the guy in Venice 1965 would be the best. Or just before when he was between Florida and California. My parents were in Venice right at the time The Doors were getting all their shit together. To peek into that world at that time would be incredible. Benjamin Franklin is a very, very close second. I think his wit was remarkable, in that very sly way. We have the same birthday, and there tend to be many parallels of interest.

Ben Franklin did play the guitar. And glass armonica. There was some scandal around the glass armonica; it was said the armonica “excessively stimulates the nerves, plunges the player into a nagging depression and hence into a dark and melancholy mood that is apt method for slow self-annihilation.” Have you been a part of any scandalous self-annihilation lately?

I came very close to passing out on stage at the end of our last show, TWICE! Doesn’t seem like much of a scandal but it sure felt weird, and I suppose there was scandal potential. Not sure if it was the music, the whole vibe, or the drunken stupor. Probably a little bit of everything.

What typeface would you select for your tombstone?

Cooper Black is right up there at the top of the list. I know that would look completely ridiculous on a tombstone— and that would be good. That would be a fine addition to “For The Love of Cooper,” a photo gallery on the new plazmfonts.com website. But to have it on my tombstone in perpetuity, not sure about that. Hmmm… so, right now, Trade Gothic would probably be the one. Although, I’ve never seen it cut in stone. I’d have to run a test first. If someone set my tombstone in Petescript, I would definitely have to come back and do some haunting.

Petescript is the very first typeface I designed, circa 1992. I was a student at PNCA, and I was experimenting in a lot of different areas. The school had a copy of Fontographer, so I thought I’d try my hand, pardon the pun, at creating type. It’s based on my handwriting. I see it every once in a while, but it never got very big. Funny thing though, it has shown up in some very interesting places. In particular, on the front cover of an Aerosmith Best of compilation called BIG ONES. A real shining moment in my career. I’ve also seen a few examples of Petescript on a certain website, let’s perhaps call it a “Men’s Entertainment” site, in which BIG ONES is an applicable descriptor.

What are the best & worst parts of being your own boss?

I work too much and I don’t work enough.

Rumor has it you also make contraptions used to hold pants up.

I started making belts a few years ago when the DOP (Doors of Perception) formed. I found an old ring belt many, many years ago and decided that I would make my own. The brand of the belts is called El Malo. Currently, I’m only taking custom orders.

Speaking of crafts, it seems letterpress is making a huge comeback, as fine art & as a trade.

Yes. But this happened quite some time ago— about fifteen years or so. It’s become a real niche, because the equipment becomes more rare, but practically indestructible. What really ends up dying out is the knowledge to make it work. That being said, I think most people can run a print through the machine but to be able to get a unique and beautiful print is another story. It’s a talent, and it’s mostly problem-solving. Also, there’s all these really cool secrets and tricks— and if they don’t get passed on, they disappear. I just finished some work for Ziba Design for a brand book they put together for the Oregon College of Arts and Crafts. The funny thing is how incredibly time-intensive and involved the whole process is. But if you don’t really know what you’re looking at, then it’s sort of like, so what. So, the appreciation for the work has to be there as well. The viewer has to have the vocabulary to really get it. We’re so used to computer screens now that the beauty of the page seems to be less appreciated. And the funny thing is that you then have to fuck it up a bit for people to really notice, instead of letting the awesome beauty and simplicity of it become what’s special about it. ¤