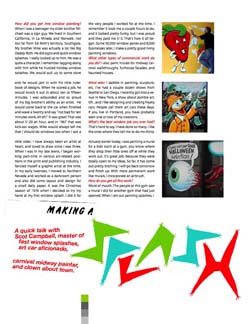 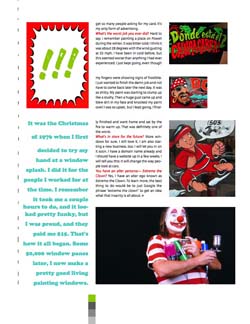 How did you get into window painting?

When I was a teenager my older brother Michael was a sign guy. We lived in Southern California, in La Mirada and Norwalk, not too far from Ed Roth’s territory, Southgate. My brother Mike was actually a lot like Big Daddy Roth. He did signs and quick window splashes. I really looked up to him. He was a quite a character. I remember tagging along with him while he hustled holiday window splashes. We would pull up to some store and he would jam in with his little notebook of designs. When he scored a job, he would knock it out in about ten or fifteen minutes. I was astounded and so proud of my big brother’s ability as an artist. He would come back to the car when finished and wave a twenty and say “not bad for ten minutes work, eh eh!” It was great! That was about $120 an hour, and in 1967 that was kick-ass wages. Mike would always tell me that I should do windows too when I got a little older. I have always been an artist at heart, and loved to draw since I was three. When I was in my late teens, I began working part-time in various art-related positions in the print and publishing industry. I fancied myself a graphic artist at the time. In my early twenties, I moved to Northern Nevada and worked as a darkroom person and also did some layout and design for a small daily paper. It was the Christmas season of 1976 when I decided to try my hand at my first window splash. I did it for the very people I worked for at the time. I remember it took me a couple hours to do, and it looked pretty funky, but I was proud and they paid me $15. That’s how it all began. Some 50,000 window panes and 8,000 businesses later, I make a pretty good living painting windows.

What other types of commercial work do you do?

I dabble in painting, sculpture, etc. I’ve had a couple dozen shows from Seattle to San Diego. I recently got into a venue in New York, a show about zombie art. Oh , and I like designing and creating freaky cars. People call them art cars these days. If you live in Portland, you have probably seen one or two of my creations.

What’s the best window job you ever had?

That’s hard to say, I have done so many. I like the ones where they tell me to do my thing. Actually earlier today, I was painting a mural for a kids room at a gym, you know where they drop their little ones off at while they work out. It’s great job, because they were totally open to my ideas. So far, it has come out pretty bitching. I will go back tomorrow and finish up. With more permanent work like murals, I incorporate an airbrush.

How do you get all this work?

get so many people asking for my card. It’s my only form of advertising.

What’s the worst job you ever did?

Hard to say. I remember painting a place on Powell during the winter. It was bitter cold; I think it was about 28 degrees with the wind gusting at 35 mph. I have been in cold before, but this seemed worse than anything I had ever experienced. I just kept going, even though my fingers were showing signs of frostbite. I just wanted to finish the damn job and not have to come back later the next day. It was so shitty. My paint was starting to clump up like a slushy. Then a huge gust came up and blew dirt in my face and knocked my paint over! I was so upset, but I kept going. I finally finished and went home and sat by the fire to warm up. That was definitely one of the worst.

What’s in store for the future?

More windows for sure. I still love it. I am also starting a new business, too. I will let you in on it soon. I have a domain name already and I should have a website up in a few weeks. I will tell you this: it will change the way people look at cars.

You have an alter persona— Extremo the Clown?

Yes, I have an alter ego known as Extremo the Clown. To learn more, the best thing to do would be to just Google the phrase “extremo the clown” to get an idea what that insanity is all about. ¤