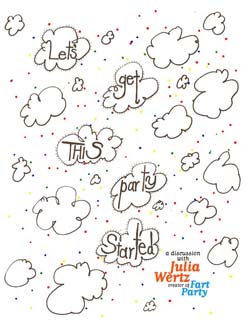 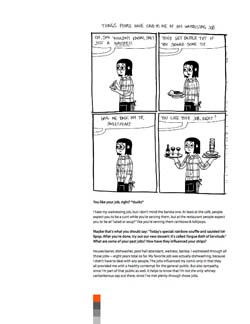 Get This Party Started
Julia Wertz

Maybe that’s what you should say: “Today’s special: rainbow souffle and sautéed lollipop. After you’re done, try out our new dessert: it’s called Tongue Bath of Servitude. What are some of your past jobs? How have they influenced your strips?

Housecleaner, dishwasher, pool hall attendant, waitress, barista. I waitressed through all those jobs— eight years total so far. My favorite job was actually dishwashing, because I didn’t have to deal with any people. The jobs influenced my comic only in that they all provided me with a healthy contempt for the general public. But also sympathy, since I’m part of that public as well. It helps to know that I’m not the only whiney cantankerous sap out there, since I’ve met plenty through those jobs.

There’s nothing like a little healthy contempt for the general public to stir the muse. A recent strip of yours features The Black Hole of Self-loathing (BHSL). We’ve all seen this BHSL. It will turn an otherwise-nice day into a giant stinking pile of poop. What are some methods you use to kick the BHSL‘s ass?

I don’t have any methods. I usually surrender and spend the afternoon drinking beer on the couch while watching crappy scratched DVDs from the library. But I usually make buttons while I do this (which I sell at dumbshirt.blogspot.com) because no matter how shitty I feel, I can’t just sit and do nothing. I’m like a five year old, but one that can drink and play with sharp things.

And draw. I’ve read the Q&A on your site, fartparty.org, but let’s pretend I haven’t, so I can ask you this question:
What, pray tell, is a fart party? And how did it end up the name of your comic? Please answer in the form of an anecdote.

How about a poem?

There once was a comic called Fart Party
it made some people laugh loud & hardy
the name, an enigma
carried much stigma
and made the cartoonist feel retardy.

I feel deeply moved. Thank you. (wipes eyes)
Nate Beaty, who does BrainFag (short for Brain Fatigue), has talked about how much fun he had with the name at first… then later came to regret constantly having to explain it. Apparently, receiving buckets of hate-mail from homophobes quickly lost its novelty. With Nicholas Gurewitch’s Perry Bible Fellowship, he gets email asking him why he’s anti-Christian. Any problems with Fart Party haters? Have you been swarmed by angry bunghole-clenching beano-advocates?

I love BrainFag. Nate takes really awesome photos, too. But, the name. Yeah, I do hate having to explain it all the time, and I know it turns a lot of people away from the comic. Sometimes people say things like: I hate the name of your comic, so I refused to look at it for a long time, but then I did and I realized it had nothing to do with farts. And I feel bad for my mom, who hates saying it. And every time she reads it at work, a coworker will inevitably say “what is Fart Party?” with disgust and distain. But there’s also people who have more legitimate reasons to hate Fart Party, and often I totally agree with them.

Your mom reads your strip at work? Hm. I guess there’s a chance she’ll be reading this… Hi, Julia’s mom. Julia, is there anything you want so say to your mom, or anyone else?

Yeah, my mom will read this. Her favorite swear word is “shit.” When something goes wrong, she yells “shitshitshitshit!” and it’s hilarious. As for shout-outs, I’d like to say fuck you very much to Buster who broke my heart in the first grade, and to Gabriel Perkins who wiped a booger on my jumper in second grade.

How did your mom come across the strip? Knowing she reads it, are you ever tempted to self-censor?

I told her about it. I held off telling her for a long time, until I realized it wasn’t just going to be a passing phase in my life, so I told her. I don’t really censor anything for her, she’s just good at pretending she didn’t read it.

Any plans to go full-time with comics?

Much to my mother’s chagrin, yes. I’d like to learn how to draw well and make longer stories. I’m not sure where comiking will take me, but I know it’s the only thing I really care about so I’m not about to give it up for, oh, money or something. It’s why, even though I went to college, I choose to work shitty jobs— so I can focus on making comics.

Reminds me of Nicholas Gurewitch’s inspirational words (from last issue): “Cherish your misery.”

Why is everything Gurewitch draws or says complete genius? PBF is one of my top three favorite comics. Can I plug a few more comics here? Okay: Laura Park, Joe Sayers, and Janelle Hessig.

Which term would you use to describe yourself:
a) comix artist
b) fartist
c) illustrator
d) someone who draws stuff
e) an upstanding citizen of the zinester community
f) Action Hero of the Self-Publishing Realm
g) meh
i) other

i) other: turd in a punch bowl

Well, somebody’s gotta do it, right? Now for a silly rhetorical question: If you were sitting in front of a giant red button that, if pushed, could erase any comic strip from history— POOF— what would you choose?

I fucking HATE Sally Forth. It really might be the worst comic ever. And I don’t like Cathy, Garfield, or any of the usual ones people should hate. But can I mention some dailies that I really like? I think Brevity and Lio are fucking great.

Okay. LAB, being the sophisticated, urbane, cosmopolitan publication that it is, likes to really dig deep in interviews, piercing the superficial layers of quotidian chatter with shrewd questions designed to expose a glimpse of the true mortal in each and every interviewee. Here is one of those penetrating questions: What’s your favorite kind of fart? Least favorite?

Ah. The infamy of the Dutch Oven. Have you even been the unlucky recipient of a Dutch Oven?

When I was little, my older brother would wrap me up in a sleeping bag, fart in it, then push me down the stairs. It was actually lots of fun, minus the farting part.

What do you see yourself doing when you’re 75?

Comics, hopefully. But with a little money involved, so I can do comics only. I’d like to live in some eccentric little cabin somewhere, where I can make comics and crafts and stuff.

I want to be the kind of old lady who bakes cookies and swears in front of kids. I can’t wait to be old, because then I have a legitimate reason to be a cranky, bitter drunk.

If I’m not working, I like to go to bed early, around 8 or 9. I am usually up reading until 1 or 2am, but I’m still in bed early with popcorn, a beer, a book, and a couple of comics. I like baking things like cookies and cupcakes when I have people over, and I can’t stand it when people move things around in the kitchen or fridge. I could go on, but I think that’s three, and I’m embarrassing myself.

BONUS question (500 points!) Consider the following scenario:
You’re sitting at a cafe when a stranger walks up to you and starts talking to you. This person seems nice enough, but it turns out they know all kinds of incredibly intimate details about your personal life, and you don’t recall ever having met this person before. At some point, you realize that they’ve read some of your zines. This explains things, but you’re still a bit creeped out by the whole encounter. Of course, you have no one to blame but yourself— you’ve published this stuff yourself. Hence, the Zinester’s Paradox: you want to include stuff that’s real, authentic, and funny in your work (which often ends up being material drawn from your private life), but you can’t control who reads this stuff, and you’d rather not have complete strangers asking you about, say, your recent heart-wrenching break-up. Or why you pee in your sink.
Discuss.

This happens to me at work a lot, people who have read my comics come in, order a drink, and then ask a really intimate question. It sucked a lot right after I got dumped and people would come in asking about my boyfriend, as if I fancy discussing my personal life to total strangers. But, like you said, it’s my fault for putting it out there. Luckily, I only actually put about 20% of it out there, so I can keep the other 80% secret. Also, sometimes events don’t actually unfold as I’ve drawn them. In issue #4, where my boyfriend was leaving for Vermont, in the end of the comic, we broke up, as we’d planned to do during the months and weeks leading up to his departure. In real life, we decided to stay together at the last minute and try the long distance thing, but I had all the comics drawn out & didn‘t want to go back and write more. But I ended up getting dumped six months later anyway, and I only made one comic about it. So, right after he left, people would talk to me or treat me like I was devastated, when in fact, I wasn’t. And then when I actually was, no one knew really knew about it. I think the weirdest thing is when I make a comic about a difficult situation I’m dealing with, and then people email me to offer advice, as if I’m just floundering around in real life, unable to make my own decisions and looking to rely on the advice of total strangers who think they know what’s going on, but really have no idea. And I’m boring myself with this answer, so I’m done.

Are you saving the other 80% for a potential book?

There are huge events in my life that I have plans to turn into comic books, but what I mean by the other 80% is stuff from my daily life. A comic is just one minute out of a day or an entire week.

This much I know: you’ve got two bicycles that you’ve given names.

They’re named Bikey and Dr. Luv n’ Brite. Bikey is my city/beater bike that I ride everywhere, and the Dr is a fancier road bike that I only take out for long bike rides. I saved up for a long time for the Dr, but my true love is Bikey, because we’ve been through a lot together. This is the gayest answer I’ve given yet.

This week, what are some of your favorite things? Cream colored ponies and crisp apple streudels? Doorbells and sleigh bells and schnitzel with noodles?

Sea monsters. I’ve been drawing them obsessively and pouring over old nautical maps at the library in search of them. And I can’t stop listening to the Decemberists‘ The Mariner’s Revenge Song. It is the perfect song and story in so many ways. Old beer, brewery and cigarette ads. Lemon cookies and IPA.

Any parting words of wisdom or favorite inspirational quotes?