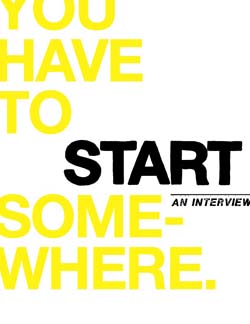 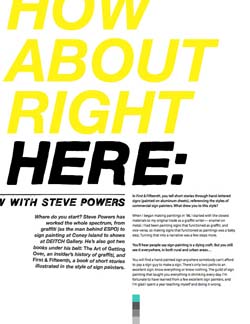 Where do you start? Steve Powers has worked the whole spectrum, from graffiti (as the man behind ESPO) to sign painting at Coney Island to shows at DEITCH Gallery. He’s also got two books under his belt: The Art of Getting Over, an insider’s history of graffiti, and First & Fifteenth, a book of short stories illustrated in the style of sign painters.

In First & Fifteenth, you tell short stories through hand-lettered signs (painted on aluminum sheets), referencing the styles of commercial sign painters. What drew you to this style?

You’ll hear people say sign-painting is a dying craft. But you still see it everywhere, in both rural and urban areas…

You will find a hand-painted sign anywhere somebody can’t afford to pay a sign guy to make a sign. There’s only two paths to an excellent sign: know everything or know nothing. The guild of sign painting that taught you everything is shrinking every day. I’m fortunate to have learned from a few excellent sign painters, and I’m glad I spent a year teaching myself and doing it wrong.

You were slapped with a six-count felony indictment courtesy of the state of NY. Did this serve as a kind of crossroads?

No. I was done painting on walls. It was like the party was over, the keg was kicked, and I was sleeping, and the cops came in to break it up. Graffiti cops are autograph seekers with guns.

Graffiti removal has turned into its own sub-genre. Have you seen Matt McCormick’s The Subconscious Art of Graffiti Removal?

You’ve painted signs and rides at Coney Island with the Creative Time project.

It was a real simple switch to go from making art that served myself to art that served the public. I pursued a couple projects that accomplished the latter, but were really vehicles for the former. With Coney I felt like I finally was closing a circuit The Luggage Store and Margaret Kilgallen opened a decade before. Art for people who needed it, where they needed it most. It was a good time, all the carnys made more money, and thousands more people got off their ass and saw Coney in its dirty glory before it got turned into a shiny turd. Creative Time did a spectacular thing there, way better than those Christo gates. What was THAT? Did I dream that?

Build an ark and put two of every persona on there. Then wait for a real rain to wash the scum off the streets, etc etc.

Someone has posted the following comment in their review of First & Fifteenth on Amazon:

Stephen Powers is a pioneering French couturier whose modernist philosophy, menswear-inspired fashions, and pursuit of expensive simplicity made him arguably the most important figure in the history of 20th-century fashion design.

I can’t confirm or deny any of the info, as it was apparently written by an Amazon reviewer named Matt Goias. I will say most of this sounds like Coco Chanel’s biography, but everybody says I remind them of her.

You’ve said before that the difference between art & graffiti is a matter of catering: “Graffiti gets you a baloney sandwich, and ‘work of art’ gets you wine and cheese.” With the art world’s growing acceptance (and even fetishization) of street art, some graff artists are getting wine and cheese. There’s a couple of college courses on graffiti now. Graphic designers are picking up the stencils, stickers, and spraycans. Do you think street art will be / has been absorbed into mainstream culture?

I think most stencil and the arty aspects of street work have already been absorbed, but the flat black tag is still free. Long may it roam unfettered by Urban Outfitters.

A lot of your work has been done or shown in public spaces. How do you feel about Creative Commons?

I get ripped off all the time. I’m sure its payback for all the theiving I do, so I don’t care if it’s someone trying to make a dollar out of 13 cents (that was stolen from Snoop, I think), but corporations that are diluting and distributing get a call from my lawyer, and successful litigations result in more funds for projects like Coney Island. All that said, I work from the point of view that if you need it, take it. If you use it for good, God bless. If you use it for evil, then I’ll see you in hell. I think CC is a great idea, the possibilities in music alone boggle the mind.

Some say that the Mission School / Beautiful Losers look has been co-opted.

My style has very little to do with anything on the visual landscape. I try to paint what doesn’t exist in the world already. I never felt at home with the Beautiful Losers, and certainly not the Mission School (what is that term?). I’m down wholeheartedly with a bunch of the BL artists, but I want to be principal of my own school, then a classmate in that school.

Principal Powers. It has a nice ring to it. Speaking of schooling, do you take on interns? Do you think the method of apprenticeship will come back into style?

I have assistants only as long as it takes them to figure out what I’m doing, then they go off and do it themselves. The turn-over is tremendous. Email me if you want to get down. Applicants must demonstrate that they have good ideas I can steal off them while they’re stealing from me.

I don’t predict the future, but I report the news. I am a 2007–8 Fulbright Scholar. I will be painting walls in Dublin and Belfast. I’m painting signs in Coney Island later this year, and I’ll be having a show at Pennsylvania Academy Of Fine Art in October. Not to mention the Bumrush UK record— that I am writing and supplying vibery for. Think of The Sugarcubes without Bjork.

If you could have any of the following superpowers…

a) flying (oldie but goodie)
I fly every night.
b) nano-spraycans built into your fingertips
I’ll settle for a crisp manicure.
c) the ability to make perfect right angles without a T-square
I can do that with the bend of the elbow.
d) the ability to eat steel (and maybe nylon, too)
My plumbing doesn’t deserve that.
e) the ability to turn into five people for five minutes
Quintophenia? Pass.
p(question). f) other (you name it)
I want to make hidden agendas visible.

If you could choose to live in any decade or era…?

Good. Because the LAB time machine is broken right now. But, seriously, it seems a lotta folks are either burying their heads in nostalgia and everything retro, or looking into the future, anxiously waiting for everything to fall apart, whether it’s being called the Long Emergency, Global Warming, Peak Oil, Armageddon, Apocalypse, or some other flavor of a dystopian future. Do you still have hope?

Some day, people will want to travel to this moment for all the good this moment offers. I’m here to make the best of it, so I will. ¤