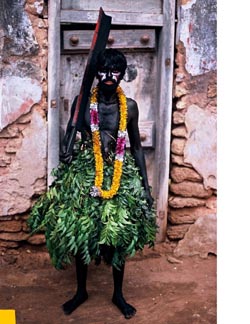 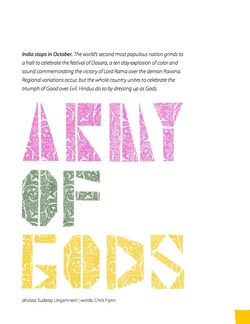 India stops in October. The world’s second most populous nation grinds to a halt to celebrate the festival of Dasara, a ten day explosion of color and sound commemorating the victory of Lord Rama over the demon Ravana. Regional variations occur, but the whole country unites to celebrate the triumph of Good over Evil. Hindus do so by dressing up as Gods.

The story: Rama’s mother was tricked into exiling Rama. His wife and his brother, Lakshmana, kept him company, but the demon Shoorpanakha showed up and demanded one of the brothers marry her. After she threatened to kill Rama’s wife, Lakshmana cut off her ears and nose. Shoorpanakha’s brother, the demon King Ravana, was angered by his sister’s disfiguration, and kidnapped Rama’s wife as revenge. Thus begins the Ramayana chronicles, which follow Rama as he searches for his wife and faces a showdown with King Ravana.

Modern Hindus celebrate Rama’s victory in a festival that must seem like madness to an outsider. Crowds numbering in the hundreds of thousands dance to a mixture of classical Indian music and heavy Tamil pop beats. Huge generators spewing black smoke power the spotlights and speakers. Enormous Bollywood-style dance numbers are enacted in town squares, troupes competing fiercely to be the most popular.

On the ninth day, the use of weapons is celebrated, a concept linked to the legend of the Shami tree, where the Pandavas Gods once hid their divine weaponry. The modern equivalent are the tools used in everyday life, the objects that earn the average Hindu a livelihood. Laptops and taxis are worshipped on this day, boomboxes and cellphones. All are decorated with flowers and blessed.

And the costumes! Men dress as women, women dress as men, and all mortals dress as Gods until the final day of Vijayadashami, which culminates in a ritual burning of Ravana effigies, huge and menacing. Dasara is Burning Man in every town and city of the nation at the same time, ten days when the Gods regain their armies. ¤