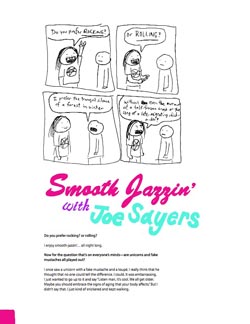 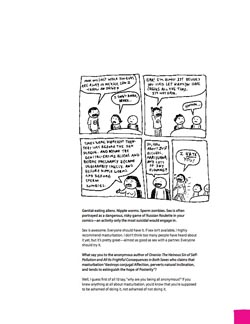 Do you prefer rocking? or rolling?

I enjoy smooth-jazzin’… all night long.

Now for the question that’s on everyone’s minds—are unicorns and fake mustaches all played out?

I once saw a unicorn with a fake mustache and a toupé. I really think that he thought that no one could tell the difference. I could. It was embarrassing. I just wanted to go up to it and say “Listen man, it’s cool. We all get older. Maybe you should embrace the signs of aging that your body affects.” But I didn’t say that. I just kind of snickered and kept walking.

Genital-eating aliens. Nipple worms. Sperm zombies. Sex is often portrayed as a dangerous, risky game of Russian Roulette in your comics—an activity only the most suicidal would engage in.

Applying the hand brake, badgering the witness, menage a moi, paddling the canoe, dating Rosie Palm and her five sisters, dropping the kids off at the pool, rubbing the unicorn’s horn, whipping the pony, diving for pearls, muffin buffin’, perusing the Yellow Pages, two-finger typing, tickling the taco, and genital stimulation via phalangetic motion.

Are you religious much? Do you pray to the Giant Grasshopper?

I was actually raised a pretty devout Christian. It probably goes without saying that I don’t really identify with that religion any more. So I don’t pray at nothin’. I yell my desires into the void. And I get everything I want.

What have you screamed for lately? Besides ice cream?

Many of your comics contain, uh, certain ‘adult thematic elements.’ Have any of your strips ever been censored?

“Five minute comics” is your tagline.

I time myself with a Casio digital wristwatch missing one half of the band. It was a gift from my boss at my gardening job. Every time I look at it, I think “dear god please let this comic I’m about to draw be funny and then let someone buy it and then also they will give me lots of money and I’ll never have to go back to that fucking gardening job which has given me nothing but future damaging skin conditions and this digital wristwatch.”

Which term is preferable: a) comics, b) cartoons, c) graphic novels, d) pictures deliberately juxtaposed for narrative intent, or, e) other

Corn-mix has given you muscular fore-arms, I see. And a rolex. It seems comics have been getting more respect lately.

Comics have been getting more respect, but particularly autobio stuff. It’s crazy, every publisher in America wants to publish the next new big awesome graphic novel, as long as it’s about your childhood. I mean, no disrespect to the genre. There’s some really great stuff out there. I loved Allison Bechdel’s Fun Home. Marjane Satrapi’s books are great. Vanessa Davis is amazing. Jesse Reklaw’s Couch Tag books are emotional and funny, not to mention beautifully drawn. Sometimes I think gag comics will always be at the bottom of the heap. But maybe that’s ok. ‘Cause then I can continue to unabashedly swear and make references to drugs and sex and not worry that I’m going to offend someone. Yay bottom of the heap!

I’m Going To Rip Your Face Off (henceforth to be called IGRYFO) is a rather dry, highbrow academic title for a mini-comics series. Did you consider any edgier titles before settling on IGRYFO?

No, but the book was originally going to be a book of comics for kids. I don’t think the content would have been too much different. Maybe less swears. Or maybe more—I don’t really like kids.

Some say children are downright evil—the leading cause of music piracy. Since when did breeding get so trendy?

Well, thankfully breeding was popular in the seventies, too. ‘Cause my parents were all over that one. I guess maybe it’s retro now or something. No one was having babies in the eighties or nineties. They were all watching John Hughes movies and flipping their hair just so. But, now, people are putting on a Christopher Cross album, sliding into a pair of bell-bottoms, and saying, “Honeyface, let’s make babies all night long.” And I say, fine, make your babies. Have two or three in succession. Have them because they are fun or to make a little extra money. Have them because they validate your existence and make you feel “complete.” But please, I beg of the breeders of the world, please please please stop bringing your children to bars. I am trying to get drunk and draw comics. And the last thing I need is some colicky infant or toddler prancing about, destroying the serenity of adults yelling and laughing and drinking too much. I don’t get drunk at your kid’s daycare, so please don’t bring your children to my bar.

If your personality were a typeface, what would it be?

If there is a font called Bacon Cheese Burger, that would sum me up.

Classy. I can see it. Maybe with a drop shadow, though.

Oh, and small caps. I think that small caps are just so… sexy.

Oh yeah. With some tight kerning. Okay. What’s the biggest drawback of being famous? Has cavorting with the glitterati grown irksome yet?

The worst part about being famous is that no one knows who you are. Not in person, not online. At least that’s been my experience.

You’ve self-published over 20 mini-comics. You know a thing or two about DIY publishing.

One thing that I’ve learned is that I’ve started to get a little tired of DIY publishing. I mean, I love making minicomics, but trying to keep 25 of them in print—or even just half of that—causes me to spend an uncomfortable amount of time at the copy store. It’s fun to do for the first couple print runs of a comic and then it becomes tedium. Thank god for Little Otsu, who published Teen Power this spring. But ultimately I really do love a lot about self-publishing. It’s fun to create something where you have total control over every aspect of the production. When it’s done you have something that is 100% yours. My first minicomic was basically a collection of tiny drawings called Product Directory that I did at a bar for fun. I would just go in every day after work and get a beer and draw these little random pictures. Then I had this totally original idea that no one had ever thought of before to collect them into a little book and give them to friends. I made maybe 20 copies and gave some away. Then I went into Comic Relief in Berkeley to see if I could sell them there and it turns out that all of these other people had stolen my idea, then traveled back in time and made it look like zines and minicomics were decades old. It was crazy. I was blown away.

What are some of the jobs you’ve held? Did they influence your comics?

The job that I think influenced my comics more than anything was my very first real job. When I was in junior high I sold hot dogs and soda at the school football games. Anyone at that point who had any question about how cool I was got the answer along with their change. In truth, though, it did sort of seal the deal on my outsiderness and freakishness which was probably the best thing that could have happened. The desires and skills to be a cartoonist often come from living on the fringe and I love the fringe. I love being a weirdo.

The fringe is a good place to be. Any advice to weirdos who have yet to embrace their weirdo-ness?

Unless you really really want to get into that sorority/fraternity or that spot on the governing board of your local Mormon tabernacle, there is no reason at all to not live your utmost freakiness potential. It’s so much more fun to just do what you want without regard for what other people think. You’ll be happier and people will like you more. You won’t be judging and censoring your every thought and action to make sure that it “fits in” with society and all that bullshit. Trying to be “cool” and act like everyone else is fine for junior high. That’s kind of the purpose of that time of life. But as you get older, giving a shit about what society will think about what you do is just about the most limiting way to live. And you will be sad. And you will hate yourself.
(Please note that the above does not apply if you’re into murder or sex with animals or hurting kids in any way or drinking shitty beer. In those cases, you suck and should withdraw yourself permanently from society)

I’ve heard rumors of these alleged “five-minute comic battles.” Supposedly, cartoonists come out of these events scarred for life, and fortunes are won and lost within the time it takes to eat a taco. Could you tell us something of the dark world of comic “battles”?

Well, first of all, I started doing 5-minute comics when I first heard about 24-hour comics. I realized there was no way I was going to stay up for 24 hours in a row without the assistance of illegal substances (which I wasn’t in the mood for). So I tried to draw funny comics in 5 minutes or less. Then I thought that maybe the whole process would be more fun with violence and hurt feelings. So the battle was born. The first official “battle” was waged between Brian Kass, Josh Frankel, Jesse Reklaw, and myself. It was a beautiful sunny day in Berkeley. So naturally we holed up inside a bar. We spent the first 10 minutes or so writing down subjects on little slips of paper without letting the other people see them. Basically anything was fair game: words, phrases, names. It could be anything from “zombie hairstylist” to “not now, I’m punching you.” Then we threw all of the slips of paper into a pile in the middle of the table. Then we drank beer for a couple of minutes. So then two of us would square off at a time in a vicious comic battle. A slip of paper was drawn, read aloud, and the timer was immediately set for five minutes. In that five minutes, you have to come up with the funniest, most awesome comic you can. Which is hard, because five minutes isn’t really a lot of time to write and draw. And then the really horrible, scarring part comes, which is the judging. Your comic gets critiqued by the rest of the table and only one of the two contenders is considered the winner. The other: garbage. A waste of ink. And you do this again and again until you “win” or until your spirit is crushed and you question your chosen art form. In this particular battle, Josh won. I still have not gotten over it. ¤