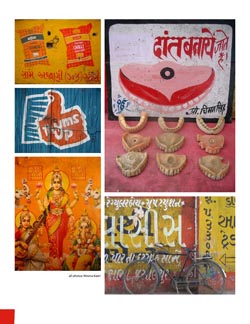 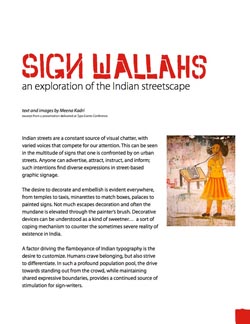 Indian streets are a constant source of visual chatter, with varied voices that compete for our attention. This can be seen in the multitude of signs that one is confronted by on urban streets. Anyone can advertise, attract, instruct, and inform; such intentions find diverse expressions in street-based graphic signage.

The desire to decorate and embellish is evident everywhere, from temples to taxis, minarettes to match boxes, palaces to painted signs. Not much escapes decoration and often the mundane is elevated through the painter’s brush. Decorative devices can be understood as a kind of sweetner… a sort of coping mechanism to counter the sometimes severe reality of existence in India.

A factor driving the flamboyance of Indian typography is the desire to customize. Humans crave belonging, but also strive to differentiate. In such a profound population pool, the drive towards standing out from the crowd, while maintaining shared expressive boundaries, provides a continued source of stimulation for sign-writers.

Visual communications take on a central role in a society that is still striving for higher literacy. Lack of a single shared language creates an additional issue. Hindi, the country’s official language, is only spoken natively by 30% of the population, and there are a further 24 languages that are spoken by more than a million people each. Many Indians understand English at a basic reading level, and its prolific use can be noted in signage across the country.

These issues somewhat explain the simple, direct nature of the language of many Indian signs. Horn Please OK would be the classic example. It is painted on trucks to encourage vehicles to sound their horns while passing. This simple phrase serves its purpose well: to communicate clearly an issue of safety. In southern India the same message has been abbreviated simply to Sound Horn, though the economy of expression is accompanied by a dose of the decorative.
Eariler, artists were commissioned by the British and upper classes for portraits or religious imagery. The late 19th century saw painters producing imagery that increasingly served commercial interests, as artists adapted to emerging applications for their skills. “What really has changed is the canvas of the artist—which is now the city itself.” (Tara, p 131)1

Religious expression has a highly-integrated presence in Indian life. This is evident in graphic works, where adoration finds its way into many contemporary signs. This is still often expressed in a nostalgic, highly-idealized fashion, which provides a contrast to the harsher realities of urban Indian life. Embellishments are often more reverent than their message actually requires, which can be mis-read by foreigners as a love for kitsch.

Above, we see some custom typographic technique useds on Delhi cycle-rickshaws. You would never find two designs the same. Each salutes a different owner or driver with a unique identity. At the beginning of my time in India, I saw the arrival of the compulsory new natural-gas-powered rickshaws in Ahmedabad. When they first started appearing they were bare, new, and identical. Two years later, I had witnessed a number of styles of decoration and typography catch on as drivers and sign-wallahs sought to customize their vehicles in new and bolder ways.

These evolving graphic fashions and techniques provide vibrant food for the urban Indian eye that craves novelty as much as it respects tradition. Styles can also locate vehicles as being from a certain place, such as this example typically seen on trucks in Maharastra. In a country as vast as India, regional identity is often vibrantly evident through graphic styles.

The men behind these graphic and signage works are called sign-wallahs or graphic-wallahs. This kind of half-English, half-local phrase is common in Indian speech and reflects a tendency to assimilate imported influences. ‘Wallah’ means someone who provides particular goods or services: rickshaw-wallah or music-wallah. Sign-wallahs create all sorts of visual communications from full wall advertisements to smaller signs to hand-painted number plates.

Some of them specialize in sticker-cutting, where they use sheets of coloured adhesive. They call it radium, because it glows in the dark. This is arranged to form creative typography and graphic embellishments. Radium designs are commonly applied to rickshaws, taxis, and other vehicles, and have the added bonus of providing moving advertisments for a sign-wallah’s skill. Many men’s talents and individual styles are recognized in this way and so vehicular signage is therefore bound up with the expression of creative ego and often exhibits a kind of visual bravado.

So this example (top left) is recognisable to locals in Ahmedabad, as being executed by this sign-wallah (bottom left), and clients seek him out with respect for his flair and his particular style of sticker-work. Much of the staying power of sign-wallahs is due to the fact that they are ON the street and so have a direct connection with their customers and the communication context. While potential clients may be lured by technological advances, many still prefer the personable style of service of the humble streetside sign-wallah.

Sign-wallahs usually work from the sidewalk or in small roadside stalls. By working ‘from the street, for the street,’ sign-wallahs gain a certain respect that is not extended to digital output service providers which operate on the ‘time is money’ premise. Being part of street culture, sign-wallahs do not suffer the isolation that many feel people from office-bound existence. Often they have regular visitors who come and chat and drink tea with them throughout the day while they work. In this way their lives are as embedded in the street as their works.

A number of men speak fondly of the old days of abundant work. Some started out doing more varied work such as commissioned portraits, which were still popular in the 1960s. Some are now relegated to doing mostly number plate signage, which provides a small but constant source of roadside income. Busier men often recruit their sons to help out… but the majority have greater professional aspirations for their youth. However, as so often, practicality wins out over idealism, and so the trade continues to be largely passed on through families.

Changes in technology have continued to challenge working methods as with anywhere else in the world. Sticker cutting, which used to be completely manual, can now be produced digitally. But it is still compiled by hand and usually with a considerable amount of creative skill. There are some cutters who work mainly by hand-cutting and they tend to be sought out for their expressive and innovative designs. Although many sign-wallahs lament the decrease or change in work since digitally-output signage has hit the scene, others have diversified through collaboration and offer a wider range of skills.

An example: the Patel family of Mirzapur in Ahmedabad. The Patels run a fixed shop run by family members spanning 3 generations. Mr. Patel Senior and his son learned their hand-painting trade on the street, while Mr. Patel Junior has a Bachelor of Commerce from a local college. After graduating, he decided to join them and runs the business side while keeping up to date on new technology. The Patels collaborate with digital producers to provide a range of services, but the greatest profit margin is from the application of digitally-cut numbers and embellishments for vehicles.

Global players like Coca Cola have embraced the services of sign-wallahs as part of their media thrust in India. Both digital and hand-painted signage ages quickly in the Indian climate, but weathered painting is perceived to work in favor of brands. It can make them seem embedded in the streetscape, as if they have had a long historical presence—a significant factor in a country where tradition is respected. The constant dialogue between the local and global is a prominent characteristic of contemporary Indian streetscapes. ¤