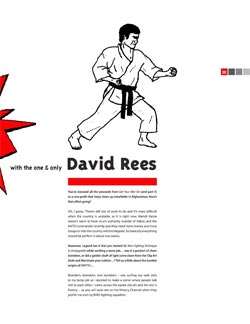 Get Your Interview On
David Rees

David Rees, the creator of the comic strips My New Fighting Technique Is Unstoppable, Get Your War On, My New Filing Technique is Unstoppable, and The Adventures of Confessions of Saint Augustine Bear, the slam-talkin’ grandmaster of clip-art re-purposing, does some interview kung-fu on an insouciant young grasshopper at LAB, and hands him his ass on a platter.

David Rees, everyone. David, is your fighting technique truly unstoppable?

No, I don’t have a fighting technique. I never took karate or kung-fu or whatever you call it. That kind of activity never interested me. I took piano lessons and played soccer.

Do you want to fight me? Like, if we can get this brick wall out of the way?

(LAB: Actually, to be honest, I don’t want to fight you. If my life were a comic strip, it would maybe be My Fight-Avoidance Technique Is Unstoppable.)

*ahem* You’re currently getting ready to go on tour with John Hodgman. How did you two meet up?

Hodgman contacted me after reading My New Fighting Technique is Unstoppable in 2000. He basically contacted me to tell me what a genius I am. (“Thanks, and by the way, tell me something I don’t know.”) Then we became friends. Then he said, “Do you mind if I become the biggest celebrity in the world?” And I said, “Hell no!” So I called Hewlett-Packard and said, “Make this dude the star of your commercials. But you should pretend they’re Apple commercials so hipsters are OK with it.”

You’ve donated all the proceeds from Get Your War On (and part II) to a non-profit that helps clean up minefields in Afghanistan. How’s that effort going?

OK, I guess. There’s still lots of work to do and it’s more difficult when the country is unstable, as it is right now. Hamid Karzai doesn’t seem to have much authority outside of Kabul, and the NATO commander recently said they need more money and more troops or else the country will disintegrate. So basically everything should be perfect in about two weeks.

Awesome. Legend has it that you started My New Fighting Technique Is Unstoppable while working a temp job… was it a product of sheer boredom, or did a golden shaft of light come down from the Clip Art Gods and illuminate your cubicle…? Tell us a little about the humble origins of MNFTIU…

Boredom, boredom, and boredom. I was surfing rap web sites at my temp job so I decided to make a comic where people talk shit to each other. I came across the karate clip art and the rest is history… as you will soon see on the History Channel when they profile me and my WWII fighting squadron.

What’s been the best/worst part of the attention you’ve received over GYWO and MNFTIU?

BEST: Meeting all the famous celebrities I do drugs with now. “Just a minute Cher, I’ll be done with this interview in a second. Keep the cocaine mountain ready for me.”

WORST: Always getting arrested for all my drug-smoking because I am a high-profile lifestyle influencer. “Sorry Kate Moss, I smoke more crack than you and I look better doing it.”

What are some of the jobs you’ve worked in the past? Did any of them influence your style?

Just regular crummy jobs. Boring temp jobs with computers. Jobs that make you feel like a loser, so you create fantasy cartoon worlds where people yell at each other because they’re panicked about their lives.

Adventures of Confessions of Saint Augustine Bear. Could you talk a little bit about where the inspiration for this strip came from?

Well for one thing, the inspiration came from a little book called The Confessions of Saint Augustine, which is awesome. I had been reading it at a temp job and I also had a new collection of animal clip art, so I thought, what if I made a comic called Adventures of Confessions of Saint Augustine Bear? I decided to announce the public debut of this comic before I had made a single strip, and that motivated me to actually create it. And it’s been so much fun, and so rewarding, that I’ve made like a grand total of ten strips in the past three years or something. LAZY!!!

Do you think animals are capable of sarcasm?

What, you mean you don’t think animals are capable of sarcasm?

No, seriously, I do— because AREN’T HUMANS ANIMALS???

Actually, I was rather under the impression that animals are tiny automata, made of little intricate gears and parts. Like Jacques de Vaucanson’s Digesting Duck, which followed the principles of Descartes’s mechanistic universe, and bolstered the Enlightenment-era belief that animals were just automaton meat machines.

Err. Right. It’s been said that Get Your War On, was a response to Vanity Fair editor Graydon Carter’s post-Sept-11 comment that “irony was dead.” I think it would be fair to say that irony is alive and kicking. In fact, you might even say it flourishes on the internets. Any comment on the current condition of irony?

Well, I don’t really like irony for irony’s sake. (“Let’s tell a bunch of rape-and-AIDS jokes to prove how edgy we are.”) So I think in a way I am coming around to Graydon Carter’s point, even though he still strikes me as a pompous dickface. Or actually, I think I leapfrogged his point about the death of irony, and found my own point about the death of irony. I took his point to mean it was no longer appropriate to make fun of the government, or to tell jokes about horrible tragedies. This seemed to play into the hands of the White House, who wanted everyone’s balls in a cup after 9/11 so they could do whatever they wanted. But I think it is morally-appropriate to take an ironic attitude towards life. See Contingency, Irony, and Solidarity by Richard Rorty.

Which I just happen to have read! Isn’t that convenient? Of course, Rorty’s account of our present situation rests on the by-now familiar neo-Wittgensteinian contention that we have no permanent access to the truth; all we have are the vocabularies we create:

Do you agree that there is no universal truth? And, if that is the case, is it okay to steal crap like those little soap bars from hotel rooms?

I doubt there is a “universal truth.” However, that doesn’t mean people are free to do whatever they want. Morality and ethics don’t need to be pegged to universal truths in order to function. But you are certainly allowed to take those little soap bars from hotel rooms— that’s how I get all my shampoo.

You’ve received a buttload of press in the last 4–5 years. Journalists seem to relish characterizing you as a well-mannered, polite guy in a brown sports jacket. Any comment?

Fuck ‘em all. “Peace Sells… But Who’s Buying?” Megadeth quotes. Heavy metal attitude, punk rock flair. The hottest shoes and hairstyles. This is the new David Rees. Welcome to 1492— the 2006 edition. Columbus discovers America in a whole new way. An America known as DAVID REES. “Show me the maize, show me the money.” Jerry Maguire, the Director’s Cut, Starring David Rees. Question: Is he the next Tom Cruise? Question: Since when was he not? Screw the journalists. There is no objective reality. Destroy all magazines. Poop on the newspaper and feed it to your dog. Welcome to the blogosphere, the new media. I saw you in Lou Dobbs’ comments section. Your ISP resolved to my server. Are you following me? You are your own worst enemy, “Mean Streets Media.” Collect ten farts in your spreadsheet and sell it to China. “The World Is Flat.” Your mom’s economy is made out of combat boots. Hint for all journalists: If you want to write the ultimate, most accurate article about me, just take the latest profile of Sofia Coppola and replace her name with mine and your job is done. The Pulitzer Prize Committee is looking for you—“Special Award, Best Celebrity Profile.” Congratulations: You are now fair and balanced. Oh, and pay me ten dollars every time you interview me.

A piece in the LA Weekly described your strips as having “the audacity to laugh at death itself.” Do you scoff at death, sir?

No, I don’t scoff at death, because that implies that I don’t take it seriously. I guess I make jokes about life-and-death situations so that somehow, people will hopefully remember how serious all this shit is.

You spent some time as a fact-checker for Maxim magazine. Is this where you developed an unstoppable filing technique? What type of filing system do you use at home?

My dad was a librarian so my interest in filing systems is genetic. Maxim didn’t have a filing system—just a bunch of male chauvinists sitting around with their hands down their pants.

Number E, the special filing cabinet. I just moved into a new office and all my many files are all a-strewn all about the place and I wish I had a cabinet (or maid) to clean and organize them. Also, where is choice “D”?

Sorry. I think option D was snorted at last night’s consortium of techno-pundits, sometime shortly after the lecture on how to build your own bison-compatible robotic arm with opposable thumbs out of pipe cleaners & beef jerky.

If you could live for a day in any comic strip, which would you pick?

My answer to this question has been the same for twenty years: I would live in the comic strip Pogo, in the Okefenokee Swamp.

Any words of wisdom for young grasshoppers looking to find their way in the world of cartooning?

Prepare to not be rich. Seriously, just kidding, you will be rich. Just do what makes you laugh and have fun! Just the same stupid advice everyone gives, but it works OK. But seriously, seriously, make sure you can borrow money from you parents if things get rough ¤