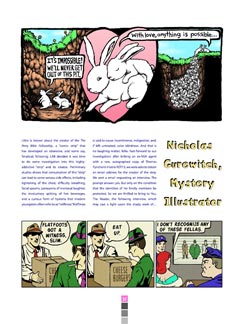 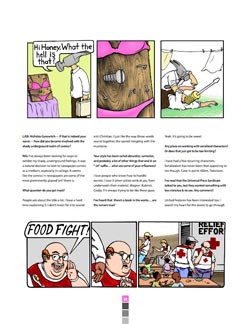 Little is known about the creator of the The Perry Bible Fellowship, a “comic strip” that has developed an obsessive, and some say, fanatical, following. LAB decided it was time to do some investigation into this highly-addictive “strip” and its creator. Preliminary studies shows that consumption of this “strip” can lead to some serious side effects, including tightening of the chest, difficulty breathing, facial spasms, paroxysms of maniacal laughter, the involuntary spitting of hot beverages, and a curious form of hysteria that modern youngsters often refer to as “rotflmao.” Rotflmao is said to cause incontinence, indigestion, and, if left untreated: color blindness. And that is no laughing matter, folks. Fast-forward to our investigation: after bribing an ex-NSA agent with a rare, autographed copy of Thomas Pynchon’s V set in ROT13, we were able to obtain an email address for the creator of the strip. We sent a email requesting an interview. The prompt answer: yes. But only on the condition that the identities of his family members be protected. So we are thrilled to bring to You, The Reader, the following interview, which may cast a light upon the shady work of…

LAB: Nicholas Gurewitch— if that is indeed your name— how did you become involved with the shady underground realm of comics?

NG: I’ve always been looking for ways to exhibit my shady, underground feelings. It was a natural decision to look to newspaper comics as a medium, especially in college. It seems like the comics in newspapers are some of the most prominently-placed “art” there is.

What question do you get most?

People ask about the title a lot. I have a hard time explaining it. I don’t mean for it to sound anti-Christian. I just like the way those words sound together, the sacred mingling with the mundane.

Your style has been called absurdist, surrealist, and probably a lot of other things that end in an ”-ist” suffix… what are some of your influences?

I love people who know how to handle secrets. I love it when artists wink at you from underneath their material. Wagner. Kubrick. Cosby. I’m always trying to be like these guys.

I’ve heard that there’s a book in the works… are the rumors true?

Yeah. It’s going to be sweet.

Any plans on working with serialized characters? Or does that just get to be too limiting?

I have had a few recurring characters. Serialization has never been that appealing to me though. Case in point: Killers. Television.

I’ve read that the Universal Press Syndicate talked to you, but they wanted something with less violence & no sex. Any comment?

United Features has been interested too. I search my heart for the desire to go through with this, and can’t quite turn up the necessary inspiration. I had considered doing a “light” one-frame comic for newspapers, but I’m thinking it might be reckless to disseminate something on that scale unless it was out of true love.

I’ll be frank— I enjoy The PBF because it doesn’t assume its audience is stupid or naive. What’s your take on the Lowest Common Denominator Syndrome; ie, the bigger an audience, the more you have to dumb it down…?

I don’t mind missing out on 50% of my potential audience for The PBF, just as long as potential enjoyment is doubled. However, there are rare works that blur the line between dumb and intelligent— films like The Empire Strikes Back or E.T.; works so mythically strong that they force people into having at least a few shunts of inspired brain activity. The quality of these works should be pursued.

Indeed. Have any publications ever refused to run a PBF strip?

My local paper, The Rochester City News, doesn’t usually run the sexy ones. The Guardian also occasionally avoids publishing a phallus, but don’t we all.

Do you bounce your ideas for new strips off a crew of cronies?

I’ve got a tight circle of fellows who I run most ideas by. I’ve been getting a lot of help from my friend Jordan Morris lately. When we’re both giddy with laughter, I can tell we’re on to something good.

The trend in graphic novels seems to moving more towards the autobiographical… but The PBF seems to be in more of a parallel universe / anthropomorphic genre, along with The Far Side, MAD Magazine, and Groening’s Life in Hell. Discuss.

I guess I miss the good ol’ days.

What two comic strips would you like to see mashed up or merged?

Why don’t we let Marmaduke get his paws on Garfield. Better yet, I’d really like to see Garfield get his paws on _Mallard Filmore_—assuming that cat eats something other than lasagna.

If you could illustrate any book cover, what book would you choose?

Off the top of my head, I think it’d be great fun to do something for Winnie the Pooh. The Hundred Acre Wood has some pretty nifty trees in it. Either that, or maybe George Orwell’s Animal Farm.

What term offends you least:

Everyone associates cartoons with animation, and “comic” has about 40 different connotations. “Illustrator” might be the most accurate. If I were to name an Other, it would probably be “storyteller.” Unfortunately, that sounds about as pretentious as “graphic novelist.”

Any golden words of wisdom to the aspiring storytellers out there?