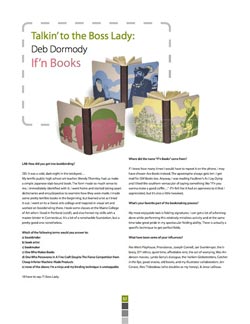 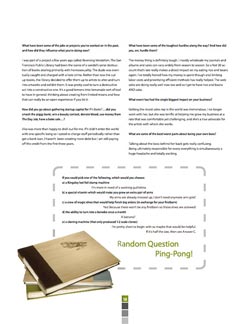 LAB: How did you get into bookbinding?

DD: It was a cold, dark night in the brickyard…
My terrific public high school art teacher, Wendy Thornley, had us make a simple Japanese stab-bound book. The form made so much sense to me, I immediately identified with it. I went home and started taking apart dictionaries and encyclopedias to examine how they were made. I made some pretty terrible books in the beginning, but learned a lot as I tried it out. I went on to a liberal arts college and majored in visual art and worked on bookbinding there. I took some classes at the Maine College of Art when I lived in Portland (cold!), and also honed my skills with a master binder in Connecticut. It’s a bit of a ramshackle foundation, but a pretty good one nonetheless.

Which of the following terms would you answer to:
a) bookbinder
b) book artist
c) bookmaker
c) One Who Makes Books
d) One Who Perseveres In A Fine Craft Despite The Fierce Competition from Cheap Inferior Machine-Made Products
e) none of the above; I’m a ninja and my binding technique is unstoppable

Where did the name “If’n Books” come from?

If I knew how many times I would have to repeat it on the phone, I may have chosen Ace Books instead. The apostrophe always gets ‘em. I get mail for ISM Books too. Anyway, I was reading Faulkner’s As I Lay Dying and I liked the southern vernacular of saying something like “If’n you wanna make a good coffin…” If’n felt like it had an openness to it that I appreciated, but it’s also a little tweaked.

What’s your favorite part of the bookmaking process?

My most enjoyable task is folding signatures. I can get a lot of scheming done while performing this relatively mindless activity and at the same time take great pride in my spectacular folding ability. There is actually a specific technique to get perfect folds.

What have been some of your influences?

What have been some of the jobs or projects you’ve worked on in the past, and how did they influence what you’re doing now?

I was part of a project a few years ago called Reversing Vandalism. The San Francisco Public Library had been the scene of a vandal’s serial destruction of books dealing primarily with homosexuality. The dude was eventually caught and charged with a hate crime. Rather than toss the cut up books, the library decided to offer them up to artists to alter and turn into artworks and exhibit them. It was pretty cool to turn a destructive act into a constructive one. It’s a good lemons-into-lemonade sort of tool to have in general: thinking about creating from limited means and how that can really be an open experience if you let it.

How did you go about gathering startup capital for If’n Books? ...did you smash the piggy bank, win a beauty contest, donate blood, use money from The Day Job, have a bake sale…?

Visa was more than happy to shell out for me. If’n didn’t enter the world with one specific bang so I opted to charge stuff periodically rather than get a bank loan. I haven’t been creating more debt but I am still paying off the credit from the first three years.

What have been some of the toughest hurdles along the way? And how did you, err, hurdle them?

The money thing is definitely tough. I mostly wholesale my journals and albums and sales can vary widely from season to season. So a Net 30 account that’s late really makes a direct impact on my eating rice and beans again. I’ve totally honed how my money is spent though and limiting labor costs and prioritizing efficient methods has really helped. The web sales are doing really well now too and so I get to have rice and beans AND cake.

What event has had the single biggest impact on your business?

Getting the nicest sales rep in the world was tremendous. I no longer work with her, but she was terrific at helping me grow my business at a rate that was comfortable yet challenging, and she’s a true advocate for the artists with whom she works.

What are some of the best/worst parts about being your own boss?

Talking about the boss behind her back gets really confusing. Being ultimately responsible for every-everything is simultaneously a huge headache and totally exciting.

If you could pick one of the following, which would you choose:

I’m more in need of a working guillotine.

My arms are already messed up, I don’t need anymore arm grief.

Yes! Because there won’t be any firstborn so those elves are screwed!

d) the ability to turn into a bonobo once a month

e) a cloning machine (that only produced 1:2 scale clones)

I’m pretty short to begin with so maybe that would be helpful.
If it’s half the size, then see Answer C.

What’s your take on the renaissance of crafting? It seems we’re seeing huge amounts of interest in knitting, stitching, sewing, jewelry making, clothes design, even letterpress and printing… but things have been slower to kindle in the realm of bookbinding… any thoughts?

There’s definitely been a ton of articles about the renaissance of crafting, but I don’t see it as a surprise at all that in a hugely unsteady job market that crafters would want to take financial matters into their own hands— and that customers would want to purchase items in which there lies the opportunity to meet the person who made that piece. It’s making capitalism a personal interaction— even if it’s over the internet. The rise of craft shows with a DIY aesthetic has been excellent for me. When I started doing shows 6–7 years ago, I never really fit in between the blown glass sculptures and needlepoint tapestries. It’s all about context. Now for some reason, I can sell better next to needlepoint tapestries that have skulls and crossbones stitched into them. The shows are also great because they’re helping to educate consumers that our prices are not higher than big box stores because we’re trying to scam people and get stinkin’ rich— but because we sat down and made that very thing with our hands. But I’ve definitely seen the bookbinding world getting bigger. There’s usually somebody who wants to be my intern, and that’s awesome. There’s certainly more bookbinders at craft shows now. As customers, too— I can spot them because they always examine the top fore-edge (head) of a book first.

Funny… that’s what I always do: check the head. Then the hinges. Which sometimes earns me some weird looks at bookstores and thriftshops.

Yeah. But to be honest, it’s definitely easier to get into a show if you’re a bookbinder than if you’re a jeweler because there’s just not as much competition. You still have to be good of course. I get jealous of jewelers once I get into a show, though. Books are freakin’ heavy. My vision of a jeweler getting ready for a show is that they pack up all their pieces in a little tiny purse and then skip over to the show whistling Sunshine, Lollipops and Rainbows. I know plenty of jewelers, so I know that’s not true, but the thought entertains me as I haul my 60-lb cases around.

Are there any resources that you’d recommend for other DIY indie start-ups?

Kiss Off Corporate America was a good book that’s really helpful in navigating the business bank account + federal tax ID number + sales permit order of things. Taxes for Dummies is a decent way to start to be informed about crunchin’ the numbers and which ones to crunch. The switchboards online forum [theswitchboards.com] is a great place for crafty businesswomen.

Any words of wisdom to pass along to the aspiring young bookbinder?

Try to win the lottery if you’re not already independently wealthy. Barring that, make sure that your products are truly unique. You’re competing mostly with sweatshop prices and most customers don’t know the difference, so you have to make your books super special in order to give them reason enough to shell out. Also, don’t forget to stretch. And do your own research.

Any big projects on the horizon? New design series?

We recently filmed a demo video about how we make our books here at If’n— but really it’s pretty much just a dance party. Jo Dery and Peter Glantz are almost done editing it and then it’s going to go up on the site. I’m pretty excited about it. It makes me laugh. I just introduced some new Wood Buttonhole Stitch Albums with gorgeous maple veneer covers that I’m very pleased with. I’m also releasing an accordion photo album kit so people can make ‘em themselves for once. And in late winter, a new pocket album for the people who don’t want to make it themselves. And once Corace stops jet-setting all over the US for her solo shows, she promised a new address and day book illustration. She coined my first rule at If’n: No blood on the books. The second rule is: Don’t make the books wrong. ¤