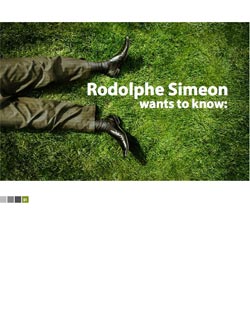 What Are You Looking At
Rodolphe Simeon

Rodolphe Simeon knows how to get your attention. His photostream on Flickr.com has seen an incredible amount of traffic— most of his photos pull in thousands of views, and hundreds of those little pink stars that signify Favorites. A multilingual Parisian photographer who is equally at home in the streets or in the studio, Rodolphe discusses some of his techniques for making the most out of situational photography. Rodolphe also talks about being his own censor, mirroring sex & violence in mass media, and, most importantly, what to do when a Romanian military agent has you in a headlock.

LAB: How do you approach your portrait subjects?

RS: Generally, I will go for a walk on the streets with no major plans nor goals. I’ll walk for hours. When I meet people, I stop and start a conversation. I don’t have a language barrier because I speak French, German and English… I find it easy to approach people. I can spend up to one hour for a photo. Sometimes more. All this is very natural to me. But I have to say that some of my photos were taken in really short meetings. A sort of “Hi! Can I take a photo?” and the photo is taken immediately. I let my intuition decide which way is the best. Some of the people I meet are truly scary (even if most of them are really nice) and I have sometimes found myself in strange and dangerous situations. Of course, to some, street photography is a violation of intimacy. It’s a fine line. But when people do not want to have their picture taken, then the photo is not taken. Even if we have spent hours chatting.

It sounds like you build a rapport with people— you build trust. And, to some degree, it sounds like it’s ultimately more about the experience than the resulting photo.

The experience is one thing. The photo is another. I try to catch the soul of people. So, for the photos I want to take, most of the time, you can’t have the picture without a deep experience with the people. Quick or long, each meeting is deeply written in my head.

Can you describe some of the situations you’ve encountered?

One night in Rome, I met a Romanian guy who claimed to be an ancient military agent. He was in the war in Kosovo. Pretty intense! As we were talking, he suddenly grabbed my head inside his elbow, where it was impossible for me to move. The only thing I tried to do was to stay calm and immobile and not to express fear. He started to play a weird game with me as if he were going to punch me in the face— but would stop his fist when he got close to my face. After a while the situation somehow became normal again. At the end, we ended up taking pictures.

You do both candid street photography and studio work. What are some of the differences between working the studio and the street?

The basics to my street photography are: 1) you do not decide on the context, and 2) you are constantly making quick decisions to produce powerful photos. My studio work starts by improvised movements or feelings. I try to make things happen spontaneously to start off the shooting. I have loose plans, ideas on make-up, the choice of objects or clothes, a vague theme, but these ideas are just ideas. I let my models be free to act how they want and then I catch them in my world! Like in the street, I have to deal with a person, in this case a model, and make quick on-the-spot decisions. Each person has his or her own gestures, attitudes, and desires. I always try to work around that to produce the photos. I let people propose the feelings that come naturally to them but I do keep control of the photo session. Street photography is great training for that. And sometimes when unexpected things happen, I push to develop the situation. In the street or in studio, I try to take emotional pictures. I believe emotions are a much better way to talk to people than words or obvious messages.

Do you use friends for your studio work? Or do you solicit models?

I use friends, models, and strangers. Some people contact me to be photographed in the studio context, and it’s very interesting to work with complete strangers. I try to not talk too much before the beginning of the photo shoot because I want to surprise the models. The only basic rule I give to them is: “Let’s have fun.” But at the actual shoot, I ask weird and unexpected questions because I have a precise idea about what they have to do with their body or faces.

So you’re not just ‘capturing’ the models, you’re interacting with them, provoking reactions. Any experiences with a camera-shy model who couldn’t break out of his or her practiced pose?

One time I had a really shy model at a session. You could immediately see that he was completely uncomfortable in his own shell. I asked him to not have any expression on his face and to do some movements with his body. As a result of this difficult exercise, his body and mind became disconnected. What interests me in working with models is to have each person reach an extreme.

Some of your work is very suggestive… very intense & vivid. Have you had any problems with censorship?

Whatever the violence is, whatever the sexual dimension is in some of my photos, you can always find a detail that says to you: “That’s funny, huh?” It’s horrible and ridiculous at the same time. It’s like a child’s nightmare. For me, this way of doing things is a more efficient way to reach people. Humor opens doors. Frank Zappa was a master in this aspect and a great role model for me. Censorship… hmmm… in a way, I’m mirroring what people accept to watch everyday on TV. And what you see on TV is really far worse than anything I do— you see murder, violence, aggression— all without any humor or deeper meaning. And I’ve got my own censorship. Some of the pictures I have taken will never be revealed, for I do not want to hurt the viewer or disrespect anyone that was involved. But I’m OK with questions like: “What is love?” / “Are you afraid of death?” / “Why do you like violence?” / “Why do you look at this picture?” I’ve got no answers to all these questions. They’re only questions. And it’s really difficult to censor questions.

My answer is: copy & paste your own question!

[laughs] I supppose the question does answer itself, doesn’t it?

But I totally agree with you. It is obvious that reality doesn’t exist as an absolute— it’s a construct, and we each build our own version. And in many directions! So how could a photograph show reality? Digital manipulation is just an extension of the camera. Manipulation of pictures has existed ever since photography existed. There is no debate for me.

What camera do you use? What did you start with?

Do you have any projects that you’re working on?

What I need to do is find an agent. This person could take care of everything. For the moment, I’m taking whatever comes my way because finding an exhibition or the right editor takes a lot of free time. But I’m definitely looking for an agent.

What are some of your influences?

Almost all of my favorite photographers are photojournalists— James Nachtwey, Sebastiao Salgado, Larry Burrows, Bruce Davidson, Leonard Freed. I would like to work in this direction in the future. I also really like Olivero Toscani because he has the talent to produce pictures that have a lot of impact (even when he is just editing others’ photography). I adore David LaChapelle because he has no fear of bad taste. Another one of my big influences is Apocalypse Now… it’s a movie with no real answers but with many questions. Each step of the trip on the river is a meeting with situations or people that are completely extreme in their own way. The main character is like a child watching real life pass by. I feel that I’m basically doing the same thing in photography. ¤