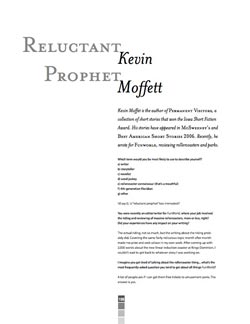 Kevin Moffet is the author of Permanent Visitors, a collection of short stories that won the Iowa Short Fiction Award. His stories have appeared in McSweeney’s and Best American Short Stories 2006. Recently, he wrote for Funworld, reviewing rollercoasters and parks.

Which term would you be most likely to use to describe yourself?
a) writer
b) storyteller
c) novelist
d) word jockey
e) rollercoaster connoisseur (that’s a mouthful)
f) 4th-generation Floridian
g) other

You were recently an editor/writer for FunWorld, where your job involved the riding and reviewing of massive rollercoasters, more or less, right?
Did your experiences have any impact on your writing?

The actual riding, not so much, but the writing about the riding probably did. Covering the same fairly ridiculous topic month after month made me prize and seek solace in my own work. After coming up with 2,000 words about the new linear induction coaster at Kings Dominion, I couldn’t wait to get back to whatever story I was working on.

I imagine you get tired of talking about the rollercoaster thing… what’s the most frequently-asked question you tend to get about all things FunWorld?

A lot of people ask if I can get them free tickets to amusement parks. The answer is yes.

You published a piece in the Believer about your FunWorld adventures. Did that affect your relationship with FunWorld at all?

Not really. The people who read the article seemed to have a sense of humor about it. Plus, there wasn’t much they could do. At the time, I’d already moved away from D.C. (Funworld super-headquarters) and had been demoted to “contributing editor,” which meant I was writing articles about lightning detection at waterparks and various types of sidewalk sealant.

Among other things, you’ve interviewed Dolly Parton— how did that go?

Interviewing Dolly Parton was, by far, the high point of my career at Funworld. I was told beforehand that I’d be allowed five minutes, but when the interview was done I realized that she’d allowed me ten. Ten! She tried so hard to answer my questions, even the stupid ones. At the end of the interview she said—I have this on tape—“Thanks, Kev. You’re a real nice guy.” She said it so definitively. As far as I’m concerned this is all that needs to be said on the subject of my personality.

You’re currently serving as a lecturer at Gettysburg College. Have you gone through a phase of acclimatizing from the midway to the classroom?

If things are going particularly well I tend to shout “Wheeeee!” But no, not really.

What have been some of your influences?

If you could meet any writer, dead, alive, or maybe halfway between—

Donald Barthelme, maybe. I have an old reading list of his, passed on by one of his former students. I’d like to ask him a few questions about it.

Any big new projects on the horizon? Plans for a novel?

Yeah, I’m working on a novel and, intermittently, stories and essays. I’m writing an essay right now about Tang, the powdered drink.

Do you have any words of wisdom you’d like to pass along to the Young Modern American Writer?

Mr./Mrs./Ms. Young Modern American Writer, I have no words of hard-won wisdom of my own, but I can offer some secondhand advice, from Harry Crews: ninety percent of the work of writing is keeping your ass in the chair. I think he said ninety percent. It might have been seventy-five. ¤