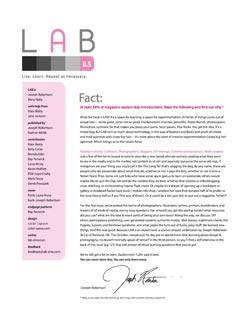 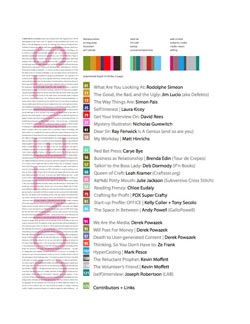 Fact: At least 58% of magazine readers skip introductions. Read the following and find out why.1

What the heck is LAB? It’s a space for learning; a space for experimentation. All kinds of things come out of actual labs— some good, some not so good. Frankenstein’s monster, penicillin. Pepto Bismol, photocopiers. Microchips, synthetic fat that makes you poop your pants. Solar panels, Pop Rocks. You get the idea. It’s a mixed bag. But LAB isn’t so much about technology, in the way of beakers and flasks and poofs of smoke and mad scientists with crazy big hair— it’s more about the spirit of creative experimentation (crazy big hair optional). Which brings us to this issue’s focus:

Freelance artists. Craftsters. Zinesters. Bloggers. DIY startups. Creative entrepreneurs. Media makers.
Just a few of the terms tossed around to describe a new breed who are actively creating what they want to see in the media and in the market, not content to sit still and passively consume the same old slop. If metaphors are your thing, you could call it the The Long Tail that’s wagging the dog. By any name, these are people who are passionate about what they do, whether or not it pays the bills, whether or not it wins a Nobel Peace Prize. Some are just folks who have some spare genius to burn on weekends; others would maybe like to quit the Day Job and do the voodoo they do best, whether that voodoo is videoblogging, cross-stitching, or orchestrating improv flash mobs. Or maybe it’s a dream of opening up a bookstore or gallery or biodiesel-fueled taco truck / mobile info-shop / wireless hot spot that donates half of its profits to the local library (tell us if you find one of these!). Or it could be a ten-year itch to put out a magazine. *ahem*

For this first issue, we’ve picked the brains of photographers, illustrators, writers, printers, bookbinders, and makers of all kinds of media, asking nosy questions like: where’d you get the startup funds? what resources did you use? what are the best & worst parts of being your own boss? Along the way, we discuss: DIY ethics, participatory publishing, user-generated content, authentic media, idiot bosses, nightmare clients, the Puppies, Sunsets, and Rainbows Syndrome, and what jazzes the funk out of funky jazzy stuff. We learned new things. And this was good. Because LAB is an experiment, a science project undertaken by Joseph Robertson (& Co) of Portland, OR. This October, Joseph quit his day job to spend more time learning about design & photography. He doesn’t normally speak of himself in the third-person, so you’ll find a self-interview in the back of this issue that will answer all those burning questions that you’ve got.

We’ve still got a lot to learn. Buckminster Fuller said it best:
You can never learn less. You can only learn more.

1 Okay, so we made that little factoid up. But it rings with a certain truthiness, doesn’t it?