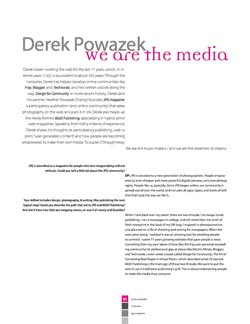 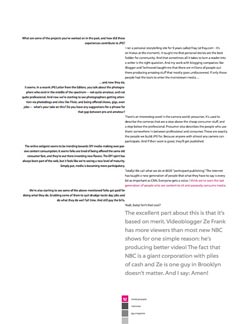 We Are the Media
Derek Powazek

Derek’s been working the web for the last 11 years, which, in internet years (1:50), is equivalent to about 550 years. Through the centuries, Derek has helped develop online communities like Fray, Blogger, and Technorati, and he’s written a book along the way: Design for Community. In more recent history, Derek (and his partner, Heather Powazek-Champ) founded JPG magazine: a participatory publication (and online community) that takes photography on the web and puts it in ink. Derek also heads up the newly-formed 8020 Publishing, specializing in hybrid print/web magazines. Speaking from half a millenia of experience, Derek shares his thoughts re: participatory publishing, web vs print, “user-generated content,” and how people are becoming empowered to make their own media. To quote O’Shaughnessy: “We are the music-makers / and we are the dreamers of dreams.”

JPG is described as a magazine for people who love imagemaking without attitude. Could you talk a little bit about the JPG community?

DP: JPG is devoted to a new generation of photographers. People empowered by ever-cheaper and more powerful digital cameras, who love photography. People like us, basically. Since JPG began online, our community is spread out all over the world, and includes all ages, types, and levels of skill. And that's just the way we like it.

Your skillset includes design, photography, & writing. Was publishing the next logical step? Could you describe the path that led to JPG and 8020 Publishing? And did it have nice little zen stepping stones, or was it all twisty and brambly?

When I look back over my career, there are two threads. I've always loved publishing. I ran a newspaper in college, and still remember the smell of fresh newsprint in the back of my VW bug. I majored in photojournalism and planned on a life of shooting and writing for newspapers. When the web came along, I realized it was an amazing tool for enabling people to connect. I spent 11 years growing websites that gave people a voice. Everything from my own labors of love (like the fray.com personal storytelling community) to professional gigs at places like Electric Minds, Blogger, and Technorati. I even wrote a book called Design for Community: The Art of Connecting Real People in Virtual Places, which described what I'd learned. 8020 Publishing is the marriage of those two threads. We want to put the web all up in traditional publishing's grill. This is about empowering people to make the media they consume.

What are some of the projects you've worked on in the past, and how did those experiences contribute to JPG?

I ran a personal storytelling site for 9 years called Fray (at fray.com – it's on hiatus at the moment). It taught me that personal stories are the best fodder for community. And that sometimes all it takes to turn a reader into a writer is the right question. And my work with blogging companies like Blogger and Technorati taught me that there are millions of people out there producing amazing stuff that mostly goes undiscovered. If only those people had the tools to enter the mainstream media…

…and now they do, it seems. In a recent JPG Letter from the Editors, you talk about the photographers who exist in the middle of the spectrum— not quite amateur, and not quite professional. And now we're starting to see photographers getting attention via photoblogs and sites like Flickr, and being offered shows, gigs, even jobs— what's your take on this? Do you have any suggestions for a phrase for that gap between pro and amateur?

There's an interesting word in the camera world: prosumer. It's used to describe the cameras that are a step above the cheap consumer stuff, and a step below the professional. Prosumer also describes the people who use them: somewhere in between professional and consumer. These are exactly the people we build JPG for. Because anyone with almost any camera can participate. And if their work is good, they'll get published.

The online zeitgeist seems to be trending towards DIY media-making over passive content consumption; it seems folks are tired of being offered the same old consumer fare, and they're out there inventing new flavors. The DIY spirit has always been part of the web, but it feels like we're seeing a new level of maturity. Simply put, media is becoming more participatory.

Totally! We call what we do at 8020 "participant publishing." The internet has taught a new generation of people that what they have to say is every bit as important as CNN. Everyone gets a voice.
I think we've seen the last generation of people who are content to sit and passively consume media.

We're also starting to see some of the above-mentioned folks get paid for doing what they do. Enabling some of them to quit drudge-tastic day jobs and do what they do well full time. And still pay the bills.

The excellent part about this is that it's based on merit. Videoblogger Ze Frank has more viewers than most new NBC shows for one simple reason: he's producing better video! The fact that NBC is a giant corporation with piles of cash and Ze is one guy in Brooklyn doesn't matter.

One of the stated goals of JPG is to take great online photography, and put it in print. Pretty straightforward. And there's something very satisfying about that, because, let's face it— stuff on the web sometimes feels a little ephemeral. Do you see a trend in taking the online material and putting it in print? Despite all the pundits who have been saying (for the last decade?) that the internet was going to kill the magazine, the newspaper, the book?

Yeah, isn't that cute? Look, I worked at HotWired in 1996. We were banging that "paperless future" gong louder than anyone. And I totally believed.

But something funny happened: paper didn't go away. And I never stopped reading books and magazines. And neither did anyone else. The internet is not going to kill paper publishing, but it is going to force it to change.

People used to buy almanacs to see what the average rainfall was. Isn't that quaint now? Magazines that are about current news and informational data are going to die. That information is better gotten digitally because it's all about being current, and the internet is better at that. So we see the big general interest magazines like Time and Newsweek going downhill fast. But niche publications are actually doing very well. Because they give you something you can't get online: permanence (magazines don't go down), serendipity (flip to a page and be surprised), and an emotional connection that's just hard to replicate on a screen. The internet has freed paper publishing from having to be about data. And I think that's great. So magazines should look at what makes them special. The traditional guys don't notice, but those of us who live online do. Magazines are special to us because they're rarer.

On your blog, Just A Thought, you've talked about your dislike for the term user-generated content. Instead, you’ve suggested the term authentic media.

The problem with that term is a matter of audience.

No self-respecting writer would would ever say, "I generate content." Uck. That phrase was invented by the people who profit by the things people make. That's why it's icky. I think it shows a huge lack of respect for the stuff people create.

JPG has been going strong for 2+ years now. What have been some of the hurdles along the way? And some of the pay-offs?

JPG started as a labor of love for my wife and I. We both had day jobs and were doing JPG on the side, so we used a print-on-demand service called Lulu to produce the magazine. That made it easy for us, but hard on our community. POD is expensive and twenty bucks is a lot to ask for a magazine. So we decided to do what we're doing now: traditional offset printing. That way we could dramatically lower the cost of each issue. But to do that, you need to print a lot. And once you have all those magazines, you have to move them, which means distribution and subscriptions. And, of course, it takes a lot of money, so that means taking advertising. It's all been totally worthwhile, but a lot of work. Still, the payoff is huge. We published almost a hundred photographers in the last issue, most of them had never been in print before. These are housewives and students, blue collar and white, from all over the world. That makes it all worthwhile.

What was the process of raising start-up funding like? Did you folks have a 5-yr plan, or was it more of a leap-and-figure-it-out-later project?

We were lucky. Paul, my partner in 8020, and I had a big plan for JPG, basically what we're doing now and more, and happened to meet Halsey Minor. Halsey started CNET in the 90s in order to put tech magazines out of business, but he'd come around to the same place we had: that there was really something special about magazines, if only they'd modernize the way they worked. He loved our idea, and invested in us, so we could start 8020 to publish JPG and, soon, more magazines.

It looks like JPG is now accepting sponsors + advertisements. Was this a move to lower cover prices? JPG has also put a respectable Advertising Code of Conduct in place, which is very clear about distinguishing content from advertisement. Could you talk a little about this development?

We believe that, when the community is creating their own magazine, you can no longer treat them like sheep. So we'll never have giant flashing punch-the-monkey ads on JPG. We can't. We'd sour the community environment and they'd leave. But we do have ads in the magazine. That's because ads in magazines really don't bother anyone. We're looking at ways to modernize the ad buying business for magazines (look for more on that soon). And there are more ways for brands to support the community. Our sponsored themes do that now— the next one, Embrace the Blur, is sponsored by Lensbabies. And at the end, they're going to give lenses to the published photographers. When the media is made by its participants, advertisers have to come bearing gifts.

Any new features on the horizon? What's next for 8020 Publishing?

We've got a very exciting set of features coming up for JPG that will give the community more ways to connect with each other and participate in the creation of the magazine. And we've got our second magazine scheduled for the first half of 2007. Woot!

Any words of wisdom for fledgling start-up publications?

Remember, right from the get-go, that the most valuable thing you have is not your technology, or your content, or your staff: it's your community. Treat them well, give them power, and make sure that everything you do is helping them, and there's no place you can't go. ¤