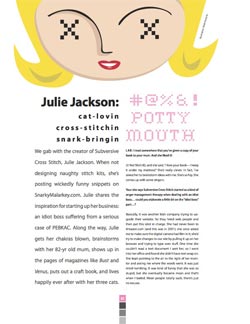 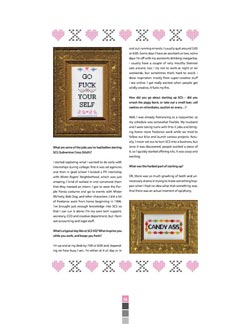 We gab with the creator of Subversive Cross Stitch, Julie Jackson. When not designing naughty stitch kits, she’s posting wickedly funny snippets on SnarkyMalarkey.com. Julie shares the inspiration for starting up her business: an idiot boss suffering from a serious case of PEBKAC. Along the way, Julie gets her chakras blown, brainstorms with her 82-yr old mum, shows up in the pages of magazines like Bust and Venus, puts out a craft book, and lives happily ever after with her three cats.

LAB: I read somewhere that you’ve given a copy of your book to your mum. And she liked it!

JJ: Yes! She’s 82, and she said, “I love your book— I keep it under my mattress!” She’s really clever. In fact, I’ve asked her to brainstorm ideas with me. She’s so hip. She comes up with some zingers.

Your site says Subversive Cross Stitch started as a kind of anger management therapy when dealing with an idiot boss… could you elaborate a little bit on the “idiot boss” part…?

Basically, it was another blah company trying to upgrade their website. So they hired web people and then put this idiot in charge. She had never been to Amazon.com (and this was in 2001); she once asked me to make sure the digital camera had film in it; she’d try to make changes to our site by pulling it up on her browser and trying to type over stuff. One time she couldn’t read a text document I sent her, so I went into her office and found she didn’t have text wrap on. She kept pointing to the air to the right of her monitor and asking me where the words went. It was just mind-numbing. It was kind of funny that she was so stupid, but she eventually became mean and that’s when I bailed. Mean people totally suck, there’s just no excuse.

What are some of the jobs you’ve had before starting SCS (Subversive Cross Stitch)?

I started exploring what I wanted to do early with internships during college: first it was ad agencies and then in grad school I landed a PR internship with Mister Rogers’ Neighborhood, which was just amazing. I kind of walked in and convinced them that they needed an intern. I got to wear the Purple Panda costume and go to events with Mister McFeely, Bob Dog, and other characters. I did a lot of freelance work from home beginning in 1996. I’ve brought just enough knowledge into SCS so that I can run it alone: I’m my own tech support, secretary, CEO and creative department, but I farm out accounting and legal stuff.

What’s a typical day like at SCS HQ? What inspires you while you work, and keeps you fresh?

I’m up and at my desk by 7:00 or 8:00 and, depending on how busy I am, I’m either at it all day or in and out running errands. I usually quit around 5:00 or 6:00. Some days I have an assistant or two, some days I’m off with my assistants drinking margaritas. I usually have a couple of very mouthy Siamese cats around, too. I try not to work at night or on weekends, but sometimes that’s hard to avoid. I draw inspiration mostly from super-creative stuff I see online. I get really excited when people get wildly creative, it fuels my fire.

How did you go about starting up SCS— did you smash the piggy bank, or take out a small loan, sell cookies on rollerskates, auction an ovary…?

Well, I was already freelancing as a copywriter, so my schedule was somewhat flexible. My husband and I were taking turns with 9-to-5 jobs and bringing home more freelance work while we tried to follow our bliss and launch various projects. Actually, I never set out to turn SCS into a business, but once it was discovered, people wanted a piece of it, so I quickly started offering kits. It was crazy and exciting.

What was the hardest part of starting up?

Oh, there was so much gnashing of teeth and unnecessary drama in trying to make something happen when I had no idea what that something was. And there was an actual moment of epiphany, though I didn’t realize it until later. It had to do with some wacky holistic treatment that a friend was wild about, which shook up my chakras or something— at least my perspective. I basically got the message that I had to chill out, get out of my own way, and stop trying so hard. One month later SCS was born.

That’s a difficult lesson: learning to get out of your own way. Okay, returning from woo-woo land: you’ve been featured in magazines like Bust & Venus; your kits have been in Urban Outfitters & Target; you’re putting out accessories with Blue Q… do you have any critics that have implied that you’re not ‘indie’ enough?

Margaret Cho owns CANDY ASS— is that indie cred? I think that when the mainstream adopts “indie” as a trend, then it’s not really indie any more. I don’t get any slack for the choices I’ve made. I mean, Subversive Cross Stitch is a business, so the point is to make enough money that I can make it my work. And to feel guilty about that would just be silly. You know, a girl’s gotta work— baby needs shoes!

It’s true— baby does need shoes. Okay: if you were sitting at a master control panel, and there was a giant red dial that you could twist back and forth to choose anything from ‘fledgling craftster looking for link swaps’ to ‘actually paying the bills (with enough left over for stamps!)’ to ‘Giant Shiny Skyscraper HQ with helicopter pad, with Huge Cross-Stitching Factory in Dubai’, and everything else in between— where would you set the dial?

I’ve had it with the struggling part, but I have no desire to do the skyscraper thing. I’m really comfortable with my “cross stitch empire” as it is, although I always welcome growth. I’m really uncomfortable with that pseudo-fame thing, where people have heard of what you do— or have read your blog— so they just stare at you waiting for you to entertain them. I always joke that I want the fortune but not the fame. My ego just isn’t that huge.

I hear you. So: ever had any clients ask you to ‘tone it down’ a little?

Only the first printer I tried to hire and I’ll gladly name them: Millet the Printer, an established Dallas printing company. They actually sent me a letter, which I still have somewhere. It basically said that they refuse to print something with a four-letter word on it because it doesn’t agree with their company policy. I hope they regret it now, because I’ve printed a ton of stuff since then. They suck.

Maybe we should send ‘em a copy of LAB.

Yes, along with a big ol’ stitched FUCK YOU! Otherwise, wholesale clients seem to enjoy ordering over the phone so they can say things like, “We need 80 Go Fuck Yourself and 45 Pussy Got Me Dizzay.” They seem to get a real kick out of that. On some of the Blue Q products we disguised the “F” word a bit to make it safer, but we left it ‘as is’ on others.

What was your inspiration for the Life Sucks, Then You Die pattern?

Grey days and laughing at the futility of life. You have to learn to laugh at everything life throws your way.

What’s your most popular kit? Which is your personal favorite?

Favorite: Bite Me. Most popular: Go Fuck Yourself, followed by Truthiness.

Have you had any ideas for kits that you ended up not producing, just because you thought the world wasn’t ready for that jelly?

I decided early on to stay away from politics, since it’s so polarizing these days (although I’d imagine I don’t have many Republican customers!) and I didn’t want Ashcroft breaking down my door and confiscating my thread. Now I have so many political quotes saved up, I may have to start a separate line. There were recently some cross stitch pieces in Vanity Fair featuring some quotes from this administration, and they were great.

You’ve shown work in some gallery shows… have you ever been tempted to head in the Fine Arts direction?

The patterns I sell are meant to be very simple and easy for anyone to do. They don’t represent my most complex work. If I start to take myself that seriously, the game is over.

Any projects in the pipe?

Oh yeah. Don’t forget I have a 2007 wall calendar out with Chronicle, and some new products with Blue Q, including cocktail coasters. And there will be some interesting developments in the next year which I can’t yet talk about. Also, when our 20-year-old Siamese cat passes on, we’re going to get two Siamese from the same litter and name them Widowie and Paducah.

Any last words of wisdom to all the craftsters out there, slaving away to the early morning hours over pipe cleaners, hot glue, and glitter?

Nobody has the exact same angle that you do, so trust in yourself. And, as Ben Stiller says, “DO it!” ¤