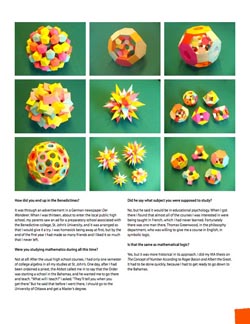 Thomas Banchoff talks with Magnus Wenninger, 89-year-old monk, mathematician, and builder of polyhedrons. The American Math Society calls him “a pioneer in the mathematical art community, whose models of polyhedra have inspired a new generation of artists.” Everyone else just calls him Father.

TFB: Fr. Magnus Wenninger, you are known around the world for your book Polyhedron Models. I’m sure readers will want to know how it was you came to devote so much of your life to these projects. Perhaps we can start with those letters after your name—what does “O.S.B.” mean?

MJW: Those letters stand for Order of Saint Benedict, and I have been a Benedictine monk for sixty years now. When I entered the Order, I was given my monastic name, Magnus, after a monk of the Middle Ages. Sometimes it seems a bit strange to have a name that translates as “great”, but that’s what it is.

At least it isn’t a name that’s too common.

That’s certainly true. “Joe” is the name I grew up with, and that’s what my middle initial “J” stands for. I was born in 1919, the second oldest of seven boys. My parents had both come from Germany to settle in Wisconsin, and it was understood that my older brother Heinie would become a baker like our father, and I was supposed to become a priest.

How did you end up in the Benedictines?

It was through an advertisement in a German newspaper Der Wanderer. When I was thirteen, about to enter the local public high school, my parents saw an ad for a preparatory school associated with the Benedictine college, St. John’s University, and it was arranged so that I would give it a try. I was homesick being away at first, but by the end of the first year I had made so many friends and I liked it so much that I never left.

Were you studying mathematics during all this time?

Not at all! After the usual high school courses, I had only one semester of college algebra in all my studies at St. John’s. One day, after I had been ordained a priest, the Abbot called me in to say that the Order was starting a school in the Bahamas, and he wanted me to go there and teach. “What will I teach?” I asked. “They’ll tell you when you get there.” But he said that before I went there, I should go to the University of Ottawa and get a Master’s degree.

Did he say what subject you were supposed to study?

No, but he said it would be in educational psychology. When I got there I found that almost all of the courses I was interested in were being taught in French, which I had never learned. Fortunately there was one man there, Thomas Greenwood, in the philosophy department, who was willing to give me a course in English, in symbolic logic.

Is that the same as mathematical logic?

Yes, but it was more historical in its approach. I did my MA thesis on The Concept of Number According to Roger Bacon and Albert the Great.
It had to be done quickly, because I had to get ready to go down to the Bahamas.

I didn’t think much about that, and I had no idea how long I would be down there. It turned out that I stayed there for thirty-five years.

We still haven’t found out how you got into mathematics.

This is how it happened. The headmaster told me he needed a teacher in English and a teacher in mathematics. Which one would I like to do? I don’t know why exactly, but since my MA thesis had to do with the philosophy of mathematics, that’s what I chose—mathematics.

It sounds as if that is about the most significant decision you made in your life.

Yes, after deciding to become a Benedictine monk, that’s right.

How did you prepare for teaching mathematics?

I just started right in, teaching at the elementary level, staying a few pages ahead of my students. I read through a text book on algebra, on trigonometry and analytic geometry, and then a text on introductory calculus. I didn’t teach any courses above that level.

And that was when you became fascinated with polyhedra?

No. That came only after ten years of teaching. I was feeling a little stale by then, and the headmaster suggested that I should go for some summer courses. This was in the late fifties, and there was a lot of interest and excitement about the “New Math.” Since there was a Benedictine parish in New York City, I could earn a Master’s degree at Columbia Teachers College in summer sessions over a four-year period, while staying at the parish. That is the time when I first became interested in polyhedra. In the display cases along the walls of the mathematics department there were models that were done by Colonel Robert Beard. I found them so attractive I started reading about polyhedra in the book by Cundy and Rollett.

Yes, and I also got into the booklet by Coxeter, DuVal, Flather, and Petrie on The Fifty-Nine Icosahedra. I started making models when I was back in the Bahamas, and I began spending more and more time working on them, now that I had my MA in Mathematics Education. After a long time, I had made all the fifty-nine icosahedra and many of the so-called uniform polyhedra. They lined all the shelves at the back of my classroom. The fruit of all this work was the publication in 1966 of Polyhedron Models for the Classroom, a forty-page booklet of the National Council of Teachers of Mathematics. It came out in a revised edition in 1975. It was then that I wrote to Coxeter.

Coxeter answers everyone. He was very helpful. He sent me a copy of the monograph on Uniform Polyhedrta written by himself, J.C.P. Miller and M. Longuet-Higgins. That was the first time I saw a full list of the seventy-five uniform polyhedra. I started making the models one after the other, using cardstock paper, tagboard it was called. I made sixty-five of them, and they were on display in my classroom. At that point I decided to contact a publisher to see if they would be interested in a book. I sent the pictures and the text to Cambridge University Press.

Did they accept it right away?

Right away they said they were very interested, if, they said, I could finish the complete set of seventy-five. That was a big “if”, because I had no idea how I could complete the ten remaining extremely complicated models without some help.

What kind of help do you mean?

Help with the calculations of the exact lengths of edges and shapes of the faces. I had been doing all the calculations and drawings on my own, but the remaining ones were too complicated for that. Fortunately I was put into contact with R. Buckley of Oxford University in England who had done the measurements, using a mechanical calculator, and who had made hand-drafted drawings. With this new information, I was able to finish the project. It was the first time all the uniform polyhedra had been made as paper models.

How long did it take altogether?

From the time I started in 1961, nearly ten years.

Can you give a brief idea of what a uniform polyhedron is?

A uniform polyhedron is one in which all faces are regular polygons, including regular star polygons, all faces meet by twos along edges, and all vertices are alike. At that time Coxeter was sure that the seventy-five were all there were, but he had no mathematical proof.

Did anyone ever find if the number seventy-five was correct?

In 1975 John Skilling of Cambridge University did a computer search that proved the seventy-five formed a complete set.

Are you doing anything with computers yourself?

Not on my own, but I keep in touch with others who are interested in using computers to see what new shapes can be discovered, not only in three dimensional geometry but in higher dimensions as well, polytopes or polychora they are called, all fascinating virtual reality objects in cyberspace. As for myself, I think I’ll just keep on making paper models. ¤