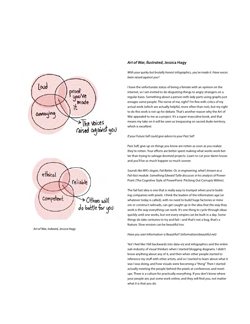 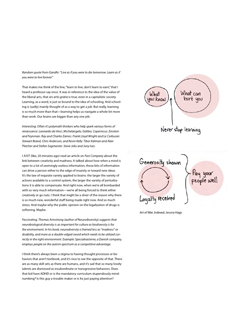 With your quirky but brutally honest infographics, you’ve made it. Have voices been raised against you?

I have the unfortunate status of being a female with an opinion on the internet, so I am invited to do disgusting things to angry strangers on a regular basis. Something about a person with lady parts using graphs just enrages some people. The nerve of me, right? I’m fine with critics of my actual work (which are actually helpful, more often than not), but my right to do this work is not up for debate. That’s another reason why the Art of War appealed to me as a project. It’s a super-masculine book, and that means my take on it will be seen as trespassing on sacred dude-territory, which is excellent.

If your Future Self could give advice to your Past Self.

Past Self, give up on things you know are rotten as soon as you realize they’re rotten. Your efforts are better spent making what works work better than trying to salvage doomed projects. Learn to cut your damn losses and you’ll be so much happier so much sooner.

Sounds like WK’s slogan: “Fail Better.” Or, in engineering, what is known as a “fail-fast module.” Something Edward Tufte discusses in his analysis of PowerPoint (“The Cognitive Style of PowerPoint: Pitching Out Corrupts Within”).

The fail fast idea is one that is really easy to trumpet when you’re building companies with pixels. I think the leaders of the information age (or whatever today is called), with no need to build huge factories or mine ore or construct railroads, can get caught up in the idea that the way they work is the way everything can work. It’s one thing to cycle through ideas quickly until one works, but not every empire can be built in a day. Some things do take centuries to try and fail—and that’s not a bug, that’s a feature. Slow erosion can be beautiful too.

Have you seen “Information is Beautiful”?

Yes! I feel like I fell backwards into dataviz and infographics and the entire sub-industry of visual thinkers when I started blogging diagrams. I didn’t know anything about any of it, and then when other people started to reference my stuff with other artists, and so I started to learn about what it was I was doing, and how visuals were becoming a “thing”. Then I started actually meeting the people behind the pixels at conferences and meet-ups. There is a culture for practically everything. If you don’t know where your people are, put some work online, and they will find you, not matter what it is that you do.

That makes me think of the line, “learn to live, don’t learn to earn,” that I heard a professor say once. It was in reference to the idea of the value of the liberal arts, that ars artis gratia is true, even in a capitalistic society. Learning, as a word, is just so bound to the idea of schooling. And schooling is (sadly) mainly thought of as a way to get a job. But really, learning is so much more than that—learning helps us navigate a whole lot more than work. Our brains are bigger than any one job.

I JUST (like, 20 minutes ago) read an article on Fast Company about the link between creativity and madness. It talked about how when a mind is open to a lot of seemingly useless information, those bits of information can drive a person either to the edge of insanity or toward new ideas. It’s the law of requisite variety applied to brains: the larger the variety of actions available to a control system, the larger the variety of perturbations it is able to compensate. And right now, when we’re all bombarded with so very much information—we’re all being forced to think either creatively or go nuts. I think that might be a sliver of the reason why there is so much new, wonderful stuff being made right now. And so much stress. And maybe why the public opinion on the legalization of drugs is softening. Maybe.

Fascinating. Thomas Armstrong (author of Neurodiversity ) suggests that neurobiological diversity is as important for culture as biodiversity is for the environment. In his book, neurodiversity is framed less as “madness” or disability, and more as a double-edged sword which needs to be utilized correctly in the right environment. Example: Specialisterne, a Danish company that employs people on the autism spectrum as a competitive advantage.

I think there’s always been a stigma to having thought processes or behaviors that aren’t textbook, and it’s nice to see the opposite of that. There are as many skill sets as there are humans, and it’s sad that so many lovely talents are dismissed as insubordinate or transgressive behaviors. Does that kid have ADHD or is the mandatory curriculum stupendously mind-numbing? Is this guy a trouble-maker or is he just paying attention?

I spent the past year being really ill. I was on a ton of meds and hanging out in a hospital at least two days a week. I was a mess and it was disgusting. My creative output was minimal. When I started to feel better, I felt like I needed to give myself a large task to prove to myself that my brain still worked. The Art of War is written in such short verses, it seemed like a good challenge to illustrate the entire thing. It’s about 300 illustrations, all together. More than any particular pharmaceuticals, sitting down and thinking it out verse by verse was therapeutic. Art as medicine, I guess. My sample size is one, so this isn’t FDA approved advice, but I heartily recommend drawing to anyone who isn’t feeling well.

DIY art therapy. It may not be FDA-approved, but it can be effective. See also: Keri Smith. Back to your illustrations— “Never stop learning” is one of the points that you illustrated from Art of War. That’s also one of the areas discussed by Norman Doidge’s book, The Brain That Changes Itself. What mindhacks (or lifehacks) do you use to keep your learning process active?

Variety. It’s a hell of a drug! I read a lot and consume a lot of media. I pick up and play with lot of things that aren’t necessarily great literature, but are different enough that they get me thinking about disparate things. Short stories by the gross, lots of articles from lots of sources. Textbooks on subjects I never studied for credit. I can blow an afternoon just muddling through Wikipedia links. The packaging on household products is a story told without verbs. And I’m lucky that I am close to downtown Seattle, and there’s always an exhibit of some sort to pop into, if I don’t feel like digesting strings of words but still need something to think about. Heck, I get hundreds of TV channels: there is always something baffling to get into. Right now on my DVR I have a documentary called The Whale that Exploded, which I am absurdly excited to watch.

Your blog, Indexed, was published as a book: How To Be Interesting: An Instruction Manual.

I am definitely an outlier when it comes to my publishing experience. I started my blog in August of 2006, and a few weeks later I got an email from my agent, offering to rep me. The book deal with penguin came a few months later. The next book, a book of postcards from Chronicle, came via my agent as well. And then the most recent book, How to be Interesting, started with an article that got passed around the internet, and the lovely people at Workman made the idea into a beautiful object. As with any creative collaborations, putting a book together will only be successful when everybody involved “gets it.” I’ve been really fortunate to work with an agent and editors and art directors who “get” my stuff.

What’s on your bookshelf? Book recommends?

The graphic novel, Marbles, is great (reading that now). And I collect anthologies of short stories. My husband has been giving me hard-to-find children’s books by famous authors, like James Joyce’s deliciously creepy story The Cat and the Devil. I’m pretty omnivorious, book-wise. On my shelf right now I have two enormous books that are strange compliments to each other: Jung’s The Red Book (featuring his illustrated dreams and theories) and Information Graphics, from Taschen. Something about putting them both on the floor and flipping between them is really satisfying.

It’s funny that while we’re literally drowning in information, getting through the spin and bias is harder than ever. Even getting someone to admit that what they are saying is an opinion and not a fact is next to impossible. I try to remember that when listening to discussions, and I hope people remember that when they read my stuff. What I put out there is just my interpretation of something—if a person wrote something, the writing is biased, if only by what the writer knows and is thinking about, even if it’s dry and seemingly unemotional.

Venn diagrams. Convenient for visualizing things like demographics, audiences, social circles, and overlapping areas of interest. What was your first exposure to Venn diagrams?

I think it was freshman algebra, when probability was covered. There’s a sort of poetry in visuals: this is this but not that. The overlap is a conjunction and the sentences are completed in the reader’s mind, not on the page. I think that’s why Venns are so useful for telling jokes: the punch line is never completely drawn, only suggested.

There is always some opportunity in my inbox. Every morning. It’s my job to run with those as far as I can. The more I put out into the world, the more connections I make and the more interesting things I get invited to do, the more people I can reach and the more things I get to think about. Properly freelancing (for me, at least) is a virtuous cycle of creating and listening and rethinking. Lather, rinse, repeat. •