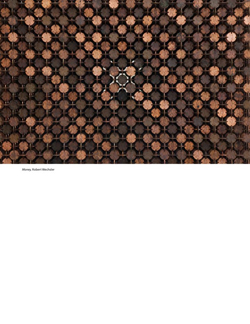 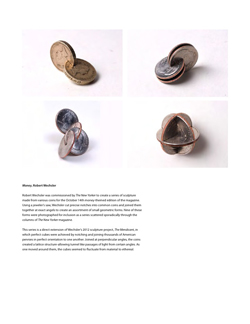 Robert Wechsler was commissioned by The New Yorker to create a series of sculpture made from various coins for the October 14th money-themed edition of the magazine. Using a jeweler’s saw, Wechsler cut precise notches into common coins and joined them together at exact angels to create an assortment of small geometric forms. Nine of these forms were photographed for inclusion as a series scattered sporadically through the columns of The New Yorker magazine.

This series is a direct extension of Wechsler’s 2012 sculpture project, The Mendicant, in which perfect cubes were achieved by notching and joining thousands of American pennies in perfect orientation to one another. Joined at perpendicular angles, the coins created a lattice structure-allowing tunnel like passages of light from certain angles. As one moved around them, the cubes seemed to fluctuate from material to ethereal.

Both The Mendicant and Wechsler’s Money series follow a line of thought and inquiry, which drives the larger arc of his creative practice. Much of his work involves the appropriation and manipulation of objects in the public sphere. In his own words:

My work seeks to awaken undiscovered virtue in everyday objects and spaces by challenging commonplace associations through careful intervention. I focus on the familiar. Comfortably accustomed to everyday objects and spaces, we are blind to their unseen beauty and elegance. Who looks at a shopping cart or a toaster for the object itself? This state of static expectations is fertile ground for surprise. A conscious re-examination of my subjects re-instates the novel back into the familiar. This is the moment of surprise, the moment we discover what is unseen in what we always see. In reverence for what initially appears modest we get a small glimpse of the boundless elegance of our world.

Wechsler’s “Money” series for The New Yorker involves the manipulation of American pennies, nickels, dimes, quarters as well as other national currencies, most notably the British pound. By carefully notching and joining coins into complex forms, Wechsler creates an engaging “whole” which entices the viewer to look again at the “part.”