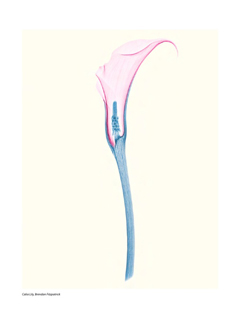 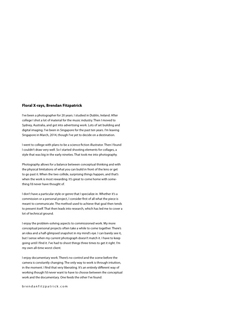 I’ve been a photographer for 20 years. I studied in Dublin, Ireland. After college I shot a lot of material for the music industry. Then I moved to Sydney, Australia, and got into advertising work. Lots of set building and digital imaging. I’ve been in Singapore for the past ten years. I’m leaving Singapore in March, 2014, though I’ve yet to decide on a destination.

I went to college with plans to be a science fiction illustrator. Then I found I couldn’t draw very well. So I started shooting elements for collages, a style that was big in the early nineties. That took me into photography.

Photography allows for a balance between conceptual thinking and with the physical limitations of what you can build in front of the lens or get to go past it. When the two collide, surprising things happen, and that’s when the work is most rewarding. It’s great to come home with something I’d never have thought of.

I don’t have a particular style or genre that I specialize in. Whether it’s a commission or a personal project, I consider first of all what the piece is meant to communicate. The method used to achieve that goal then tends to present itself. That then leads into research, which has led me to cover a lot of technical ground.

I enjoy the problem-solving aspects to commissioned work. My more conceptual personal projects often take a while to come together. There’s an idea and a half-glimpsed snapshot in my mind’s eye. I can barely see it, but I sense when my current photograph doesn’t match it. I have to keep going until I find it. I’ve had to shoot things three times to get it right. I’m my own all-time worst client.

I enjoy documentary work. There’s no control and the scene before the camera is constantly changing. The only way to work is through intuition, in the moment. I find that very liberating. It’s an entirely different way of working though I’d never want to have to choose between the conceptual work and the documentary. One feeds the other I’ve found.