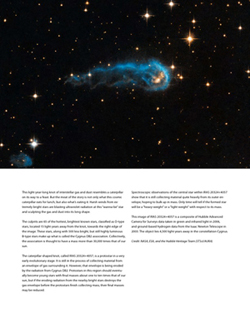 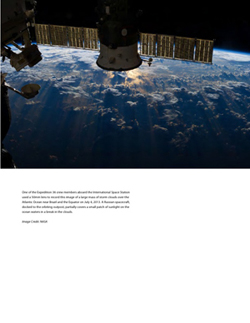 Image 1: This light-year-long knot of interstellar gas and dust resembles a caterpillar on its way to a feast. But the meat of the story is not only what this cosmic caterpillar eats for lunch, but also what’s eating it. Harsh winds from extremely bright stars are blasting ultraviolet radiation at this “wanna-be” star and sculpting the gas and dust into its long shape.

The culprits are 65 of the hottest, brightest known stars, classified as O-type stars, located 15 light-years away from the knot, towards the right edge of the image. These stars, along with 500 less bright, but still highly luminous B-type stars make up what is called the Cygnus OB2 association. Collectively, the association is thought to have a mass more than 30,000 times that of our sun.

The caterpillar-shaped knot, called IRAS 20324+4057, is a protostar in a very early evolutionary stage. It is still in the process of collecting material from an envelope of gas surrounding it. However, that envelope is being eroded by the radiation from Cygnus OB2. Protostars in this region should eventually become young stars with final masses about one to ten times that of our sun, but if the eroding radiation from the nearby bright stars destroys the gas envelope before the protostars finish collecting mass, their final masses may be reduced.

Spectroscopic observations of the central star within IRAS 20324+4057 show that it is still collecting material quite heavily from its outer envelope, hoping to bulk up in mass. Only time will tell if the formed star will be a “heavy-weight” or a “light-weight” with respect to its mass.

This image of IRAS 20324+4057 is a composite of Hubble Advanced Camera for Surveys data taken in green and infrared light in 2006, and ground-based hydrogen data from the Isaac Newton Telescope in 2003. The object lies 4,500 light-years away in the constellation Cygnus.

Image 2: One of the Expedition 36 crew members aboard the International Space Station used a 50mm lens to record this image of a large mass of storm clouds over the Atlantic Ocean near Brazil and the Equator on July 4, 2013. A Russian spacecraft, docked to the orbiting outpost, partially covers a small patch of sunlight on the ocean waters in a break in the clouds.

Image 3: This illustration shows HD 189733b, a huge gas giant that orbits very close to its host star HD 189733. The planet’s atmosphere is scorching with a temperature of over 1000 degrees Celsius, and it rains glass, sideways, in howling 7000 kilometre-per-hour winds. At a distance of 63 light-years from us, this turbulent alien world is one of the nearest exoplanets to Earth that can be seen crossing the face of its star. By observing this planet before, during, and after it disappeared behind its host star during orbit, astronomers were able to deduce that HD 189733b is a deep, azure blue — reminiscent of Earth’s colour as seen from space.

Right: image of the Antennae Galaxies by The NASA/ESA Hubble Space Telescope. Hubble has released images of these stunning galaxies twice before, once using observations from its Wide Field and Planetary Camera 2 (WFPC2) in 1997, and again in 2006, from the Advanced Camera for Surveys (ACS). The galaxies — also known as NGC 4038 and NGC 4039 — are locked in a deadly embrace. Once normal, sedate spiral galaxies like the Milky Way, the pair have spent the past few hundred million years sparring with one another. This clash is so violent that stars have been ripped from their host galaxies to form a streaming arc between the two. In wide-field images of the pair the reason for their name becomes clear — far-flung stars and streamers of gas stretch out into space, creating long tidal tails reminiscent of antennae.
(Image credit: NASA/European Space Agency)