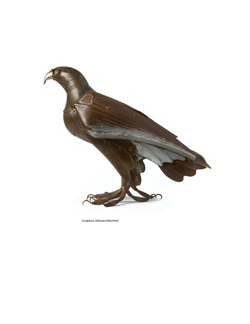 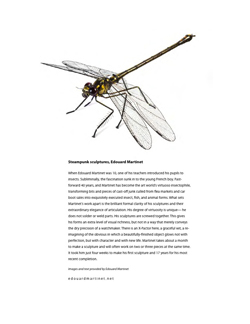 When Edouard Martinet was 10, one of his teachers introduced his pupils to insects. Subliminally, the fascination sunk in to the young French boy. Fast-forward 40 years, and Martinet has become the art world’s virtuoso insectophile, transforming bits and pieces of cast-off junk culled from flea markets and car boot sales into exquisitely executed insect, fish, and animal forms. What sets Martinet’s work apart is the brilliant formal clarity of his sculptures and their extraordinary elegance of articulation. His degree of virtuosity is unique— he does not solder or weld parts. His sculptures are screwed together. This gives his forms an extra level of visual richness, but not in a way that merely conveys the dry precision of a watchmaker. There is an X-Factor here, a graceful wit, a re-imagining of the obvious in which a beautifully-finished object glows not with perfection, but with character and with new life. Martinet takes about a month to make a sculpture and will often work on two or three pieces at the same time. It took him just four weeks to make his first sculpture and 17 years for his most recent completion.