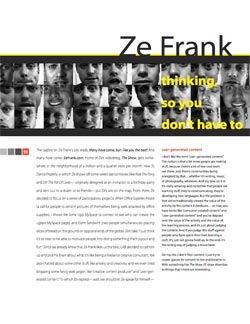 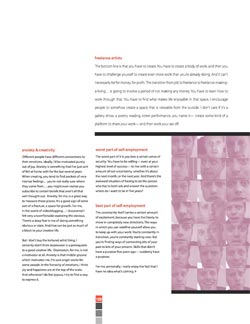 Thinking, So You Don't Have to
Ze Frank

The tagline on Ze Frank’s site reads, Many have come, but I like you the best! And many have come: ZeFrank.com, home of Ze’s videoblog, The Show, gets somewhere in the neighborhood of a million and a quarter visits per month. How To Dance Properly, in which Ze shows off some sweet dance moves (like Ride The Pony and Stir The Pot Of Love)— originally designed as an invitation to a birthday party and sent out to a dozen or so friends— put Ze’s site on the map. From there, Ze decided to focus on a series of participatory projects: When Office Supplies Attack (a call for people to send in pictures of themselves being, well, attacked by office supplies), I Knows Me Some Ugly MySpace (a contest to see who can create the ugliest MySpace page), and Earth Sandwich (two people simultaneously placing slices of bread on the ground on opposite ends of the globe). Ze’s take: “I just think it’s so neat to be able to motivate people into doing something that’s joyous and fun.“ Since we already knew that Ze Frank likes us the best, LAB decided to call him up and pick his brain about what it’s like being a freelance creative consultant. We also chatted about some other stuff, like anxiety and creativity, and we even tried dropping some fancy web jargon, like “creative content producer” and “user-generated content.” To which Ze replied— well, we should let Ze speak for himself—

Different people have different connections to their emotions. Ideally, I’d be motivated purely out of joy. Anxiety is something that I’ve just sort of felt at home with for the last several years. When creating, you tend to find pockets of very intense feelings… you’re not really sure where they come from… you might even realize you subscribe to certain beliefs that aren’t all that well thought out. Anxiety, for me, is a great way to measure those places. It’s a good sign of some sort of a fracture, a space for growth. For me, in the world of videoblogging… I discovered I felt very uncomfortable exploring the obvious. There’s a deep fear in me of doing something obvious or stale. And that can be just as much of a block to your creative life.

But I don’t buy the tortured artist thing. I certainly don’t think depression is a prerequisite to a good creative life. Depression, for me, is not a motivator at all. Anxiety is that middle ground which motivates me. I’m sure anger works for some people. In the hierachy of emotions, I think joy and happiness are at the top of the scale. And whenever I do feel joyous, I try to find a way to express it.

I don’t like the term “user -generated content.” The notion is that a lot more people are making stuff, because there’s a lot of low-cost tools out there, and there’s communities being energized by that…whether it’s writing, music, or photography, whatever. And my take on it is: it’s really amazing and incredible that people are learning stuff, they’re communicating, they’re developing new languages. But the problem is that we’ve traditionally viewed the value of the activity by the content it produces… so now you have terms like “consumer-created content” and “user-generated content” and you’ve skipped over the value of the activity and the value of the learning process, and it’s just about judging the content. And if you judge this stuff against people who have spent their lives learning a craft, it’s just not gonna hold up. In the end, it’s the wrong way of judging a movement.

On my site, I don’t filter content, I just try to create spaces for content to live and breathe in. With something like The Show, I’ll draw attention to things that I think are interesting.

The bottom line is that you have to create. You have to create a body of work, and then you have to challenge yourself to create even more work than you’re already doing. And it can’t necessarily be for money, for profit. The transition from job to freelance to freelance and making a living… is going to involve a period of not making any money. You have to learn how to work through that. You have to find what makes life enjoyable in that space. I encourage people to somehow create a space that is viewable from the outside. I don’t care if it’s a gallery show, a poetry reading, street performance, you name it— create some kind of a platform to share your work— and then work your ass off.

The worst part of it is you lose a certain sense of security. You have to be willing— even at your highest level of success— to live with a certain amount of real uncertainty, whether it’s about the next month, or the next year. And there’s the awkward situation of having to be the person who has to both ask and answer the question: where do I want to be in five years?

The uncertainty itself carries a certain amount of excitement, because you have the liberty to move in completely new directions. The ways in which you can redefine yourself allow you to keep up with your work. You’re constantly in transition, you’re constantly starting over. But you’re finding ways of connecting bits of your past to bits of your present. Skills that didn’t have a purpose five years ago— suddenly have a purpose.

For me, personally, I really enjoy the fact that I have no idea what’s coming next. ¤